Corsair has gotten around to updating its lineup of compact gaming PCs with the latest generation CPU hardware from AMD (Ryzen 5000 series based on Zen 3) and Intel (11th Gen Core chips based on Rocket Lake-S). Just as enticing, both the updated Corsair One a200 and One i200 come equipped with NVIDIA's burly GeForce RTX 3080 graphics card.
As we noted in our GeForce RTX 3080 review, the card is nothing short of impressive, delivering extreme performance across the board. It is an outstanding GPU for gaming at 4K and turning on real-time ray tracing effects. It's nice to see Corsair turning to one of NVIDIA's finest (second only to the GeForce RTX 3090) for its refreshed compact desktops.
While the CPU foundations are different between the Intel-based Corsair One i200 and AMD-based a200, both are high-end configuration. For the former, Corsair opted for Intel's flagship Core i9-11900K, which is an 8-core/16-thread processor with a 3.5GHz base clock, 5.3GHz max turbo frequency, and 16MB of L3 cache. 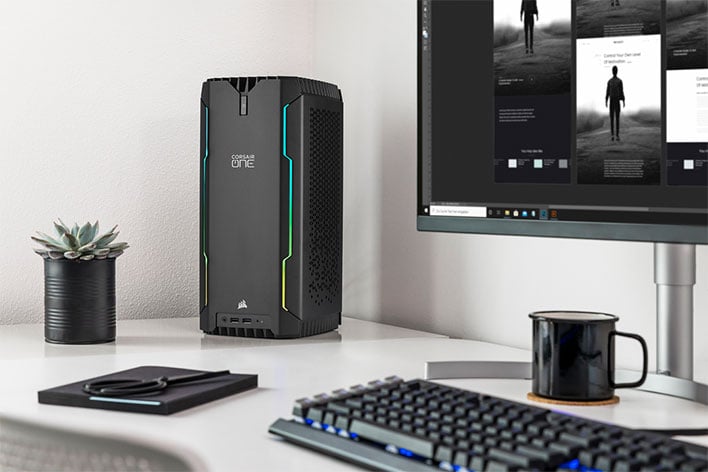 Curiously, however, Corsair didn't use the refresh as an opportunity to jump on board Intel's Z590 chipset with native PCI Express 4.0 support and other goodies. Instead, the system is equipped with a mini-ITX motherboard based on Intel's previous generation Z490 chipset. It's still going to be a blazing fast PC, but when shelling out thousands of dollars for a high-end configuration, you like to see only the latest hardware.
AMD's latest generation platform has been out longer, and as such, the refreshed One a200 is built around a mini-ITX motherboard based on AMD's B550 chipset. This is paired up with a stout Ryzen 9 5900X, a 12-core/24-thread CPU with a 3.7GHz base clock, 4.8GHz max boost clock, and 64MB of L3 cache.
Both systems feature a patented convection-assisted liquid cooling setup to keep temps in check inside the compact 12-liter chassis. They also both come with 32GB of Vengeance LPX DDR4 RAM, a 1TB M.2 PCIe 4.0 solid state drive + 2TB hard disk drive, and a 750W SFX power supply with 80 Plus Platinum certification.
As for connection options, the front I/O features two USB 3.0 ports, a USB 3.2 Gen 2 Type-C port, and a 3.5mm audio jack. Around back, users have access to three DisplayPort outputs, an HDMI output, 7.1-channel audio ports, four USB 3.2 Gen 1 ports, two USB 3.2 Gen 2 ports (Type-A and Type-C), and a 2.5G LAN port. Wi-Fi 6 (802.11ax) wireless connectivity is also included.

Tags:  (NASDAQ:INTC), (nasdaq:nvda), (nasdaq:amd), zen 3, rocket lake-s, geforce rtx 3080, corsair one a200, corsair one i200
Show comments blog comments powered by Disqus
Follow Us:
What Are You Playing Now?