"How did you find me!? Were you screen peeking!?" Many a child of the mid-90s would yell at their friends and siblings while playing Goldeneye 64 on the Nintendo 64. It's been 25 years, and thanks to the Computing History Museum in Cambridge, UK, there is now a solution. About $10k worth of additional hardware is all it took.

Cheating in games was not a new phenomenon when Goldeneye 64 was released in 1997. Many developers worked in cheats as ways to debug their games and make certain sections easier, such as the ubiquitous Konomi code. What was new was the first-person-view local multiplayer, and with that came a new way to cheat—taking a peek at your opponent's sectioned off part of the screen to glean their location to gain an advantage. You might even call this a precursor to wall-hacks, as they utilize the same result by concept, which is to gain information about enemy locations when previously there was none.

4 screen GoldenEye on the original N64 hardware! No screencheating here! …but how?
Come and experience this at our GoldenEye evening, celebrating 25 years of GoldenEye for Nintendo 64: https://t.co/F918hEQ20v pic.twitter.com/05jA82upb8

However, unlike the more recent game, Screencheat, where an entire core gameplay mechanic is to only screen cheat, this was likely not the intent of Rare Software, Goldeneye's developers at the time. So the Computing History Museum came up with a solution for the 25th anniversary event it ran over the weekend. That solution was to split the signal!

A simple, yet elegant solution to a very old problem. From the short video posted by the museum, it's not hard to tell that it utilized a radio frequency (RF) splitter that supports signal scaling. If you don't know what that means, it's basically just a way to live-split an image and then scale it so it fits.
The main purpose of these types of equipment are usually for shop displays, like TV walls, and they often were used in older displays at stadiums as well. Because of their niche market, it makes them rather pricey. For an event that allows people to come in and play the game without fear of their neighbor cheating on them, it's fantastic. The CEO of the Computing Museum, Jason Fitzpatrick, stated that it cost around 8,000 GBP in equipment, converted today to US is about $9,800. 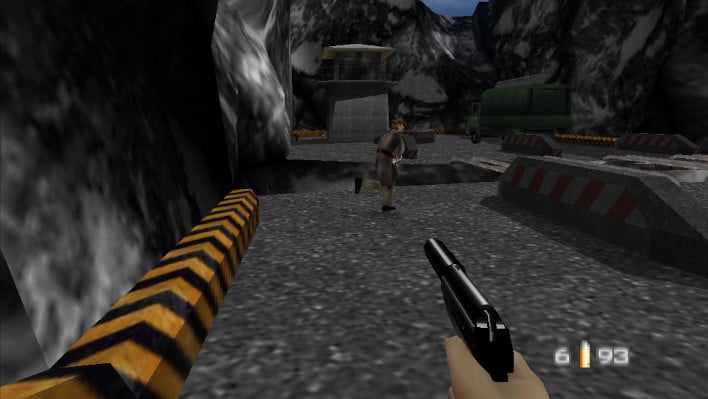 
Much of the responses on Twitter include people claiming that they had this solved with pieces of cardboard and creative seating arrangements. Sure, that works, but it's not as cool as this! Today, this is an old problem replaced by online gaming, and networked devices, which, for many games, has eliminated the need for many to include split screen as an option. In turn this solution has mostly caused the waning of the family and friends couch-gaming experience. We do still miss some friendly banter couch gaming with our friends sometimes, though, even if they were screen cheating jerks.