The long-awaited release of Cyberpunk 2077 might not be the smash hit CD Projekt Red had anticipated, but the developer is still forging ahead with a sequel. That's not all—CDPR is also going back to The Witcher universe with a trio of new titles. It has revealed some very basic details of these projects on Twitter.

First up, Cyberpunk Orion—that's not going to be the final name, but CDPR says the game is currently codenamed Orion. It will be a new adventure set in the same "dark future universe." The launch of Cyberpunk 2077 was announced ten years in advance, but a number of rethinks slowed the process. The game was finally released in late 2020, and it was not everything we hoped. The content wasn't as rich as CDPR led us to believe, and performance even on powerful consoles and PCs was lacking.

Can Orion avoid those mistakes? We'll find out someday. CD Projekt Red didn't say when Orion would arrive. And it's the same with the new Witcher games. There are three of them, starting with a game codenamed Polaris. The developer's previous Witcher trilogy followed Geralt of Rivia, a character made famous in a series of books by Andrzej Sapkowski. Polaris is the beginning of a new saga unrelated to the previous storylines, though. 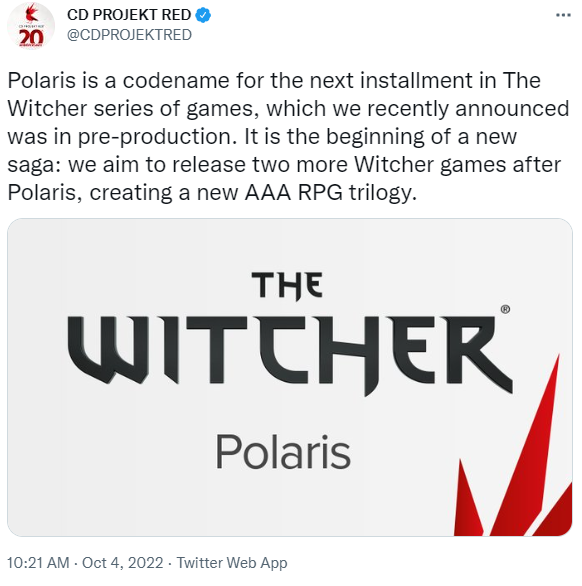 Following Polaris, CDPR promises another Witcher game currently known internally as Canis Majoris. This one will be developed by an external studio with "experienced developers who have worked on past Witcher games." Then comes Sirius, a Witcher game that will shake up the formula with both single and multiplayer options.


CDPR also teases a new game codenamed Hadar, which is a completely new franchise. Unlike Witcher and Cyberpunk, Hadar is not based on established IP, but it's in "the earliest stages of the creative process."

The developer has been hammered over the poor Cyberpunk 2077 launch these last few years. Hopefully that means more realistic development goals in these upcoming projects. You can get more info on CDPR's strategic plans in the video above.