While it may have been the most hyped-up game in and before 2020, Cyberpunk 2077 certainly got off to a rather rocky start. Bugs and glitches were rampant, performance was not the greatest (especially on consoles), and many customers were left unhappy. Now, after several patches and upcoming updates, the game is in a fairly solid state. When all is said and done, it seems that CD Projekt Red has learned some lessons for the future.


During CDPR’s strategy video shown below, the company went over what went wrong during the development and marketing of Cyberpunk 2077. Adam Kicinski explained that the launch of Cyberpunk 2077 did not meet CDPR's  core values which include quality at the top of the list. To rectify this, CDPR will first improve the process by which the company develops games. This will include better development strategies to make things efficient and seamless between games. Moreover, the company will scale up its talent pool to make workloads easier.


Another key point is improving communication to the dedicated CDPR fanbase when it comes to development. This is also attached to changing how gaming PR and marketing is done in the future, such as moving announcements and campaigns closer to the actual launch. While there still may be teasers, setting a high bar well ahead of the launch can cause numerous issues for developers. 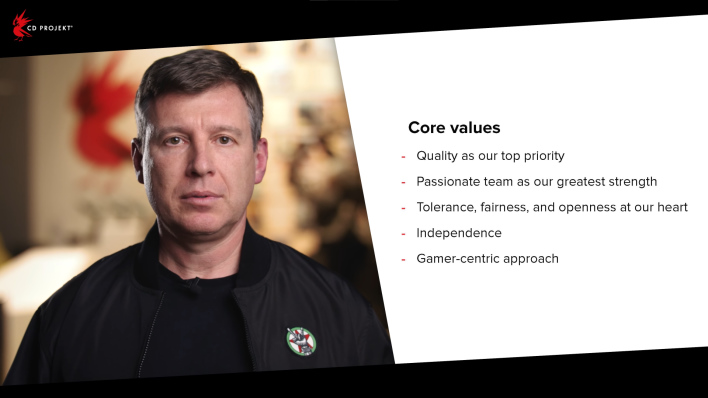 Besides the outward-facing fixes, CDPR also claims to be working on improving conditions for the various teams within the company. This includes making people feel more comfortable, empowered, and open to collaboration across the company. Hopefully, this will help reduce the crunch that developers face when it comes to intense development.

However you may feel about CDPR after the launch of Cyberpunk 2077, it seems the company is committed to fixing its past mistakes. If they do not follow through, we will certainly hear about it from the developers and internal staff who had it rough during Cyberpunk 2077's launch. In any case, let us know what you think of CDPR’s claims and promises for the future in the comments below.