If you haven't been keeping up with Windows news, Windows 11 is really trying to be tough on security. As part of that push, one of its major requirements is that your system must have a Trusted Platform Module, or TPM. Historically speaking, that was a physical device on your motherboard that provided an immutable security key for the system to use with two-factor encryption.

Most motherboards do not include a physical TPM, but modern systems can generally emulate it. AMD refers to this feature as fTPM, with the "f" standing for "firmware". As a result, when Microsoft announced that Windows 11 would require TPM support, a lot of people shrugged, turned on fTPM, and made the jump to the latest version of Windows.


Since Windows 11's release, though, reports of performance problems have slowly been piling up on various forums, particularly from AMD users. Reddit users in particular have been vocal about it, as well as customers on Lenovo's support forums, with threads that detail user accounts all complaining about the same problem, and reporting that it was resolved by disabling fTPM. 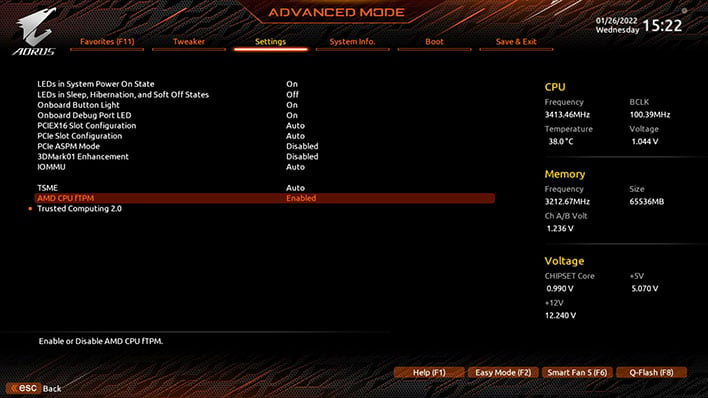 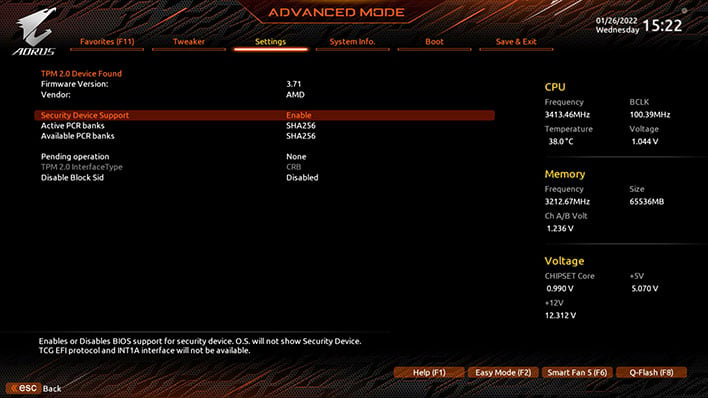 BIOS menus that let you set up fTPM on our Aorus X570 motherboard.


The specific issue at hand seems to be an intermittent stuttering bug. Essentially, a few times per day, the machine will undergo a short period of lagging and stuttering, not unlike that caused by interrupt conflicts back in the day. Applications will hang up, audio will crackle and pop, and even the mouse cursor will stutter and hitch when moving across the screen. It's concerning to see in person.

To be clear, this isn't necessarily a Windows 11 problem—it also happens in Windows 10 when the fTPM is in use. Many of these users have reported that disabling fTPM resolved the problem, but that's not necessarily an option for Windows 11 users whose operating system is already set up to make use of the feature. It is possible to run Windows 11 without a TPM, but in that case you're probably better off just sticking to Windows 10, because some applications (like Riot Games' Valorant) will break under Windows 11 without a TPM.

It's not completely obvious whether this is a fault in AMD's fTPM firmware implementation, a problem with Windows, or possibly just some incompatibility between the two. It's fairly unlikely that AMD's fTPM implementation saw much use before Windows 11's release, so this could have been an issue lurking in the background all along.

There's no real fix or workaround right now besides disabling the fTPM, but we'll make sure to report back if we hear anything from AMD or Microsoft.