It never fails when it comes to technology—as soon as you upgrade to the latest and greatest thing, a new and better thing crashes the party. Right now that new thing is Wi-Fi 7 (802.11be), a next-generation wireless standard that is officially off the ground (sort of) with Broadcom sampling complete end-to-end chipset solutions for the Wi-Fi 7 ecosystem.
Broadcom's newly introduced Wi-Fi 7 portfolio consists of five chipsets, including two for residential (BCM67263 and BCM6726), two for enterprise (BCM43740 and BCM43720), and an integrated Wi-Fi 7 and Bluetooth 5 combo chip that is optimized for mobile handsets (BCM4398). The features and capabilities vary, but they're all based on the Wi-Fi 7 standard.
Here's a high-level comparison...

Don't feel bad if you're overwhelmed by all the wireless standards in the wild. It wasn't that long ago when Wi-Fi 5 (802.11ac) was king of the hill, then came Wi-Fi 6 (802.11ax) and, not too long after, Wi-Fi 6E (somewhat confusingly also 802.11ax).
The advent of Wi-Fi 6 was a big deal in our modern connected world because it added more bandwidth, cut back on latency, and was reworked to do a much better job juggling multiple devices connected simultaneously. Then came Wi-Fi 6E to take advantage of the 6GHz spectrum that opened up (it supports up to 14 80MHz channels or seven 160MHz channels).
Part of the benefit of Wi-Fi 7 is it theoretically supports up to around 46Gbps of throughput, versus 9.6Gbps for Wi-Fi 6/6E. But just as important, Wi-Fi 7 introduces a technology called Multi-Link Operation (MLO), which enables devices to aggregate channels and rapidly switch between them. When utilized correctly, MLO will pick out the less congested channel for your wireless data.

"MLO allows networks to guarantee commercial-grade quality of service, and enables Wi-Fi as a time-sensitive networking technology for industrial and IoT applications as well. Wi-Fi 7 technology will be critical for delivering fast, reliable video streaming and other applications that require reliable speeds in congested environments," Broadcom explains. 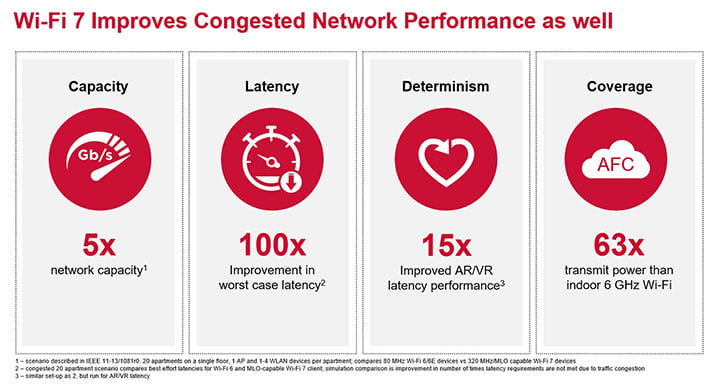 There's also a the impending launch of a feature called Automatic Frequency Coordination (AFC), and with it Wi-Fi 7 will use optimal spectrum allocation to enable high-power access points and extended 6GHz range in both indoor and outdoor environments. The net gain for consumers and enterprise customers is a combination of improvements to the wireless experience, including a five-fold increase in capacity, much better latency, and broader coverage.
"Aside from higher data rates, lower latency, and better network capacity, it is Wi-Fi 7's spectrum flexibility across three bands, its emphasis on the large 6 GHz band, and new techniques like MLO that will greatly improve Wi-Fi's deterministic performance," said Phil Solis, research director at IDC. "This is valuable to many different product types and especially to primary devices such as smartphones that have the combination of volume and heavy data usage across a wide variety of applications in both consumer and enterprise settings."
Broadcom is currently sampling its Wi-Fi 7 chips to early access partners and customers such as ASUS, Netgear, and others. Don't fret if you just upgraded to Wi-Fi 6 or Wi-Fi 6E, though. It will take some time for Wi-Fi 7 to penetrate the market. Even when Wi-Fi 7 routers arrive, the full benefits will go largely untapped until client devices come equipped with Wi-Fi 7 hardware as well.