Astronomers aren't happy with SpaceX because the Starlink satellites that it is launching into orbit at a blistering pace are much brighter than anyone ever expected. Astronomers were aware that SpaceX was launching the satellites, and the plan was well documented going as far back as 2015. The ultimate intention of SpaceX is to place about 4,000 satellites into low Earth orbit to blanket the globe in broadband internet access at a low price.

While the initial plans called for about 4,000 satellites, SpaceX has since received approval to put 12,000 satellites into orbit and is seeking permission to put up to 30,000 into orbit. As of now, SpaceX expects to launch its broadband service sometime this year. The problem that astronomers are having with SpaceX's plans is that shortly after launch, the satellites are seen as a very bright string of dots in the sky. 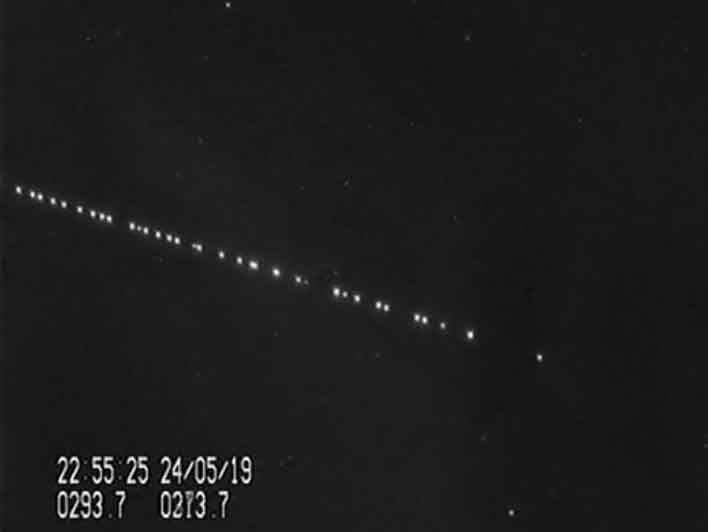 As the Starlink satellites climb to their final orbit, the brightness fades. The brightness of the satellites was a surprise to the astronomy community and to SpaceX. Astronomers say that they weren't expecting the satellites to be 4th to 5th magnitude brightness. When rating brightness, higher magnitude numbers are less bright with the faintest objects in the sky viewable with binoculars rated plus ten and the Sun rated minus 27.

Astronomers say that the brightness of the satellites could compromise the ability of ground-based telescopes to operate. Some are calling for management of the resource that is the dark night sky. Ruskin Hartley, executive director of the International Dark Sky Association, says that the night sky is "our ultimate commons," and he says no one should be able to spoil that for humanity. SpaceX contends that it is working to mitigate the brightness. For example, one of the most recent strings of 60 satellites launched had a special coating to make them less bright, and if the coating doesn't impact performance, all future satellites could be coated with it.