Borderlands has a new in-game event going on that will allow players to win special loot for Broken Hearts Day. During the event that runs through February 20, gamers can help Maurice in Sanctuary III to complete challenges and earn rewards. What players will need to do is shoot down floating hearts around enemies across the galaxy as players go about their vault business. 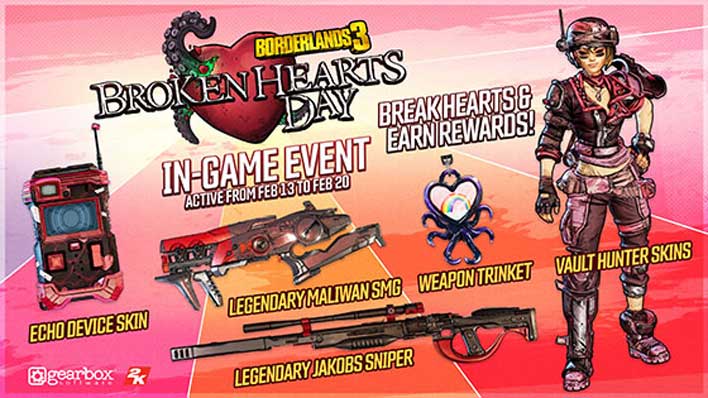 The hearts that players are shooting will take different forms and break in different ways. Some of them will fall to the ground in a fiery explosion while others may drop loot. Other floating hearts might briefly turn enemies into allies. Maurice will keep track of the hearts that players destroy and send players rewards that go along with the number of hearts destroyed. The items won for reaching specific amounts of hearts are:

The hearts have been in the environment since the February patch that deployed on February 13 at 3:00 pm. If you missed that patch deployment, you still have time since the event runs through February 20 at 8:59 am. Fans of the game can also check out information on other items that the devs are working on and content coming to the game in a community letter here. Among the items is Mayhem 2.0, skippable cutscenes, level cap increases, and upgrades to the Guardian Rank system. The coolest of the weapons is the sniper rifle which has high critical damage, but this one also refunds bullets and ricochets around on a critical hit. It's initial shot also deals fire elemental damage that becomes crypto-type on ricochet and still deals 100% of the original shot's damage. It's definitely worth busting 100 hearts to win.

It has been a while since we talked about Borderlands 3. The last time was in November 2019 when the first campaign, Moxxi's Heist of the Handsome Jackpot, was announced.