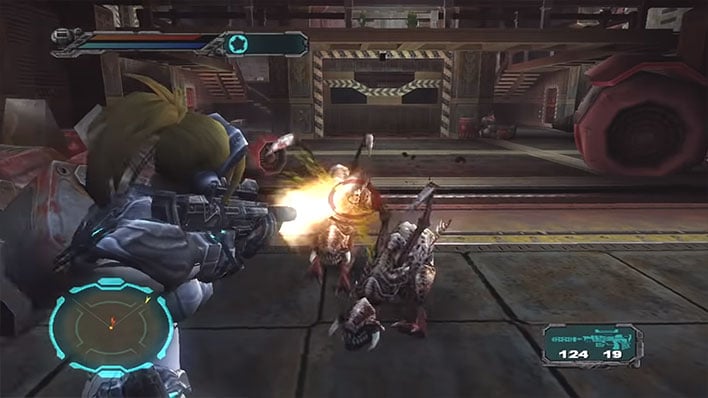 Perhaps in a parallel universe, StarCraft: Ghost (not to be confused with StarCraft 2: Wings of Liberty) released as originally planned, and spawned a series of sequels over the past decade and a half. In this universe, however, StarCraft: Ghost became vaporware, and then outright cancelled. Gone but not forgotten, screenshots and gameplay footage of StarCraft Ghost have emerged.
Originally, StarCraft: Ghost was to be developed by Nihilistic Software and published by Blizzard for the PlayStation 2, Xbox, and GameCube. After two years in development, Nihilistic Software handed the reins over to Singin' Ape Studios. Not long after, Blizzard acquired the development studio and cancelled the release of StarCraft: Ghost for the GameCube. That went down in 2005.
A year later, Blizzard halted the game's development. The future of StarCraft: Ghost was very much in question at the time, then was confirmed in 2014 to have been cancelled at some point.
"It's always really, really hard to make those kind of decisions. It was hard when we canceled Warcraft Adventures. It was hard when we canceled StarCraft Ghost. But it has always resulted in better-quality work," Blizzard co-founder and CEO Mike Morhaime told Polygon, when discussing the cancellation of Titan.
Now all these years later, gameplay footage of StarCraft: Ghost has found its way to the web. YouTube user Leers Meneses posted 13 minutes of footage, as spotted by Kotaku, but it was later yanked offline. However, there is another, shorter video of what appears to be a separate mission, uploaded by Deslo Bezerra. Have a watch...
The third-person shooter looks pretty good for an early-2000s era video game. It's not fully fleshed out, but apparently was pretty far in development when the decision was made to scrap the title, based on what's shown in the gameplay footage. We see some shooting and jumping, a bit of exploring, and a little bit of dialogue.
In the original YouTube listing, it's said this build is from an Xbox devkit. Meneses also indicated he used a modded Xbox 360 game console to access the game, and that the first two missions were not working properly. Bezerra's clip embedded above looks to be using the same Xbox build, albeit a different mission.
Maybe this game will get resurrected with modern graphics. We're not holding our breath, but hey, at least we get to see StarCraft: Ghost would have looked like more than a decade ago, had it been released as originally planned.