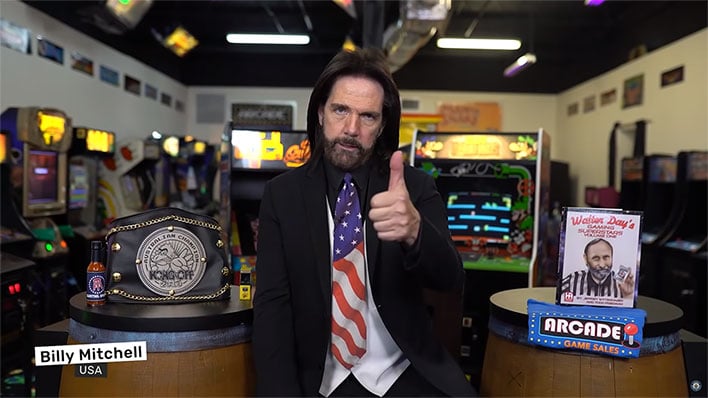 Billy Mitchell is perhaps the most polarizing figure in the history of arcade gaming, particularly as a sport where legitimately obtained high scores on original cabinet hardware carries with it a bit of fame and recognition. And in some cases, a bit of controversy as well. Adding to it, Guinness World Records has reinstated several records that were previously stripped from Mitchell.
"In the light of compelling new evidence received by Guinness World Records, the Records Management Team has unanimously decided to reverse decisions made in April 2018 in regards to videogame high scores achieved by Billy Mitchell between 1982 and 2010," Guinness said.
Those records include...

The reinstatement of the above records comes just over two years after Guinness stripped Mitchell of official recognition, following the same by Twin Galaxies, an organization that has been tracking and recognizing high scores for decades. Twin Galaxies and Billy Mitchell were both featured prominently in the documentary, The King of Kong: A Fistful of Quarters.
Where things took a turn for the worse for Mitchell was in 2017. That is when one of the moderators at Twin Galaxies brought up concerns about the legitimacy of Mitchell's records. This prompted an investigation, and ultimately Mitchell was stripped of all leaderboards for allegedly using emulation hardware (MAME) to obtain his high scores. He was also banned from submitting future high scores.
Mitchell has always maintained that he never cheated and obtained his scores legitimately. He even filed a lawsuit against Twin Galaxies in 2019 alleging defamation. It's not clear if anything ever came of that, but for Mitchell, the reversal by Guinness serves as vindication.
In a video announcing the decision, Guinness World Records editor-in-chief Craig Glenday cited "newly sourced eyewitness testimony, plus some new expert gameplay analysis and hardware verification" as reasons for reinstating Mitchell's records.
"In such cases such as this where there is a debate, we would typically defer to the original contemperaneous adjudication, and this is the case here," Glenday explained.
It all feels a bit weird, with the production quality of the video. The six and half minute video starts with Glenday explaining things, then quickly focuses on Mitchell the rest of the way, who gives several thumbs-up poses during the video.
In apparent recognition of the controversial decision, comments are disabled for the video, and the like-to-dislike ratio is hidden.