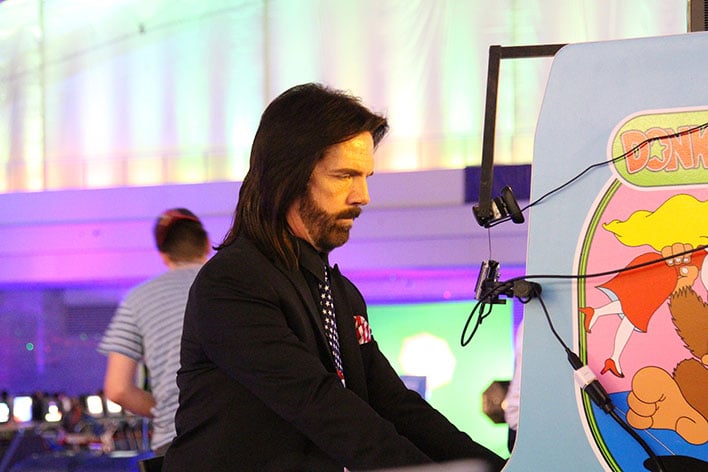 If Netflix can make a documentary about the Tiger King, then surely it can do an updated one on Billy Mitchell, the 54-year-old former record holder of several classic arcade cabinet scores. Until then, we have The King of Kong: A Fistful of Quarters to tide us over. Oh, and his ongoing legal dispute, in which Mitchell is suing Twin Galaxies for alleged defamation.

You may not have known about the lawsuit, even though it was actually filed in April 2019. Mitchell told Ars Technica the timing of lawsuit was to fit within California's statue of limitations for defamation claims, which would have expired a year after Twin Galaxies concluded its investigation into cheating allegations and removed Mitchell's multiple record scores from its leaderboard.
If this is all new to you, here's an extremely condensed version of events: Mitchell gained a bit of fame in the 1980s by seemingly achieving record scores in various classic arcade games. More recently, the forum community at Twin Galaxies called into question whether his Donkey Kong score was actually obtained on an original arcade cabinet, as video recordings of his feat appeared to show graphics transitions that would have only be done on modified hardware, which is prohibited for officially recognized records (there's a separate category for M.A.M.E., or emulated records).
This was all first brought to widespread attention by Twin Galaxies forum member Jeremy Young (Wxelnia), who filed a dispute against the validity of Mitchell's scores.

"Jeremy’s assertion concluded that not only can original Donkey Kong arcade hardware not produce the board transition images shown in the recordings, but that these transitions were actually generated through the use of MAME. The rules for submitting scores for the original arcade Donkey Kong competitive leaderboards requires the use of original arcade hardware only. The use of MAME or any other emulation software for submission to these leaderboards is strictly forbidden," Twin Galaxies.
Twin Galaxies ultimately determined that Mitchell's scores were not obtained on original hardware, and subsequently removed him from all leaderboards. It also banned him from submitting future scores.
Per the lawsuit, Mitchell's contention is that a statement published by Twin Galaxies on its findings is "libelous on its face: it asserts that Mitchell did not achieve his record scores legitimately," and asserts they were obtained "only by impermissibly and secretly shortcutting" the rules.
"The implication that Mitchell's scores were dishonestly achieved is supported by the fact that Twin Galaxies imposed heavy sanctions on Mitchell, not only stripping him of his Donkey Kong score records, but also in other arcade games, such as Pac-Man, and banning him from ever submitting scores in the future to Twin Galaxies," the amended lawsuit states.
In short, Mitchell's lawsuit essentially claims Twin Galaxies has labeled him a cheater, though Twin Galaxies has not come right out and said as much. Mitchell's lawsuit also alleges the outcome of the investigation was predetermined and was aimed at "generating publicity and internet 'clicks' by accusing Mitchell, the most visible of all video gamers, of cheating."
Twin Galaxies disputes the claims. While it has not provided a comment on the matter to the media, its lawyers argue that nothing it said was defamatory. They also point out that Twin Galaxies didn't set its sights on Mitchell without cause, and instead was responding to complaints brought forth by its community members. In particular, the forum thread discussing the topic spans over 3,700 pages and has over 2.4 million views.

From the outside looking in, it seems like Mitchell and his legal team have an uphill battle in front of them. Regardless, it all makes for good fodder for whenever Netflix decides to make its own documentary (or movie) on Mitchell and Twin Galaxies.