If there is one thing that display and projector makers have figured out, it's that people like to play games on cutting edge hardware. And just as big screen TVs often tout gaming amenities, so do some projectors, like BenQ's upgraded X3000i. The latest variant, unveiled at CES earlier this year and heavily marketed at gamers, is now available to preorder.
The X3000i is a 4K resolution (3840x2160) projector built around a Texas Instruments DLP with pixel-shift technology. This chip actually pushes a lower resolution, but by shifting pixels back and forth (and/or up and down) it can produce 8.3 million distinct pixels to achieve what BenQ calls a "true 4K" output. 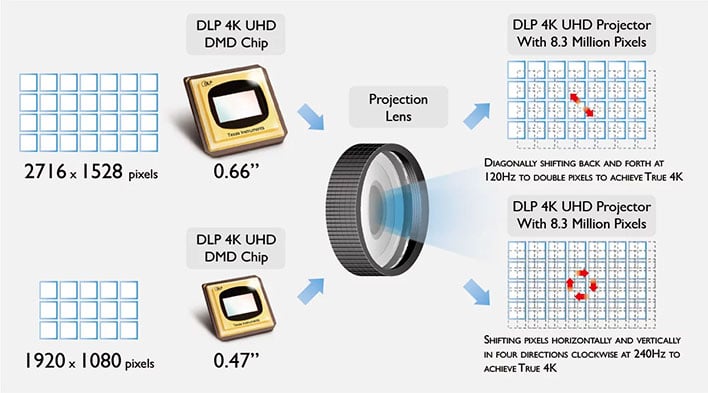 "True 4K DLP Technology achieves true 4K by producing 8.3 million distinct pixels regardless of the DMD chip’s number of native pixels. In addition to doubling the 0.66-inch DMD’s 2716x1528 pixels, 4K DLP also perfectly quadruples the 0.47-inch DMD chip’s 1920x1080 pixels to generate true 4K 8.3 million pixels with lightning-fast pixel shifting speed," BenQ says.
BenQ further states that this approach produces a "completely different" and superior 4K picture compared to 4K Enhancement technology, which also leverages pixel shifting but can only produce 4.1 million distinct pixels.
So there's your BenQ primer on pixel shifting. The X3000i is built for smooth gameplay with the ability to run at a 240Hz refresh rate and a low 4ms response time, albeit that's at 1080p (1920x1080). If playing at 4K, the refresh rate tops out at 60Hz with a 16ms response time, both of which are respectable. It also supports 120Hz at 1080 with an 8ms response time. Epson's LS12000 supports 4K at 120Hz, but costs substantially more.

Interestingly, though BenQ is marketing the X3000i heavily at gamers, it sticks with the HDMI 2.0b standard for the dual HDMI ports, rather than the more fully featured HDMI 2.1. The HDMI 2.1 spec offers optional goodies like auto low latency and variable refresh rate support.
There are dedicated modes, though, including RPG (cinematic color settings and cranked up bass), FPS (refined details and on-screen sound locator), and Sports (accentuates voices and the roar of the crowd). It also supports HDR visuals, offers 100 percent coverage of the DCI-P3 color space, and features a pair of 5W stereo speakers with Dolby Atmos support and 7.1-channel audio passthrough.
Brightness checks in at 3,000 lumens with a 500,000:1 contrast ratio. BenQ also claims that its auto color calibration and 4LED color brightness schemes enables the lamp to last 20,000 hours, which works out to over 10 years based on an average of 5 hours per day.
The BenQ X3000i is available to preorder for $1,999 and is slated to ship in the middle of next month.