For anyone that has ever uttered "I'm Batman" in a deep, raspy voice, artist Nguyen Dac Chung may have just created your ultimate crime fighting vehicle. The world's first and only electric Batmobile replica is on display and available to buy now.

When one thinks of electric vehicles, images of Elon Musk and Tesla probably come to mind. But when 23 year-old artist and architect Nguyen Dac Chung envisioned one, Batman and his iconic Batmobile filled his imagination.

Nguyen, and his partners at Hanoi based workshop, Marco Studios, are in the business of crafting superhero costumes. But if you were to ask him what piece he is most proud of, he would quickly answer The Dark Knight's epic crime fighting vehicle, the Batmobile. And he did not stop with just producing a concept vehicle that was simply for display purposes. No, "This is a fully operational tactical vehicle capable of freeway speeds," says Nguyen.

The vehicle is based on the original blueprint of a specific Batmobile, better known as Christopher Nolan's "the Tumbler". The team started with a frame made from steel and then created the armor panels that make up the body. It is comprised of materials such as ABS, composite plastics, steel and carbon fiber. Some of the parts were handcrafted, while others were 3D-printed for higher precision.

The beast weighs less than 600 kg and is capable of speeds up to 65 mph. It has an automatic transmission and is powered by an electric engine and Lithium Ion battery. There is room for two people, who can enter the vehicle via 2 automatic doors that open using a remote control. For improved visibility, the vehicle is equipped with 4 safety cameras and monitors. 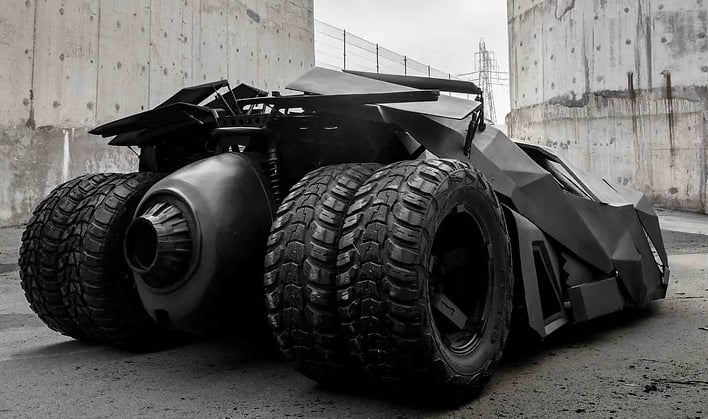 "While other cosplay businesses make costumes and accessories, I wanted to take things to the next level and blow people's minds," stated Nguyen. If you want to make an inquiry into purchasing this unique and iconic piece of art, you can visit the Van Daryl website to find out more.