The first half of January was a busy month for the Atari VCS team. It was on hand at CES 2020, showing off the Atari VCS game console with live demos and more. After CES 2020 wrapped, the team headed to China to work on manufacturing. The company says that over a two-week period in January, the team oversaw a pre-production run of Atari VCS dev units.

Those dev machines reportedly left the factory just as the team prepared for the two-week holiday break and New Year celebrations. A bunch of photos of the pre-production build process and the jigs used for construction were shared. Most of the work in the pre-production area was done by hand with workers plugging in individual components and wires. 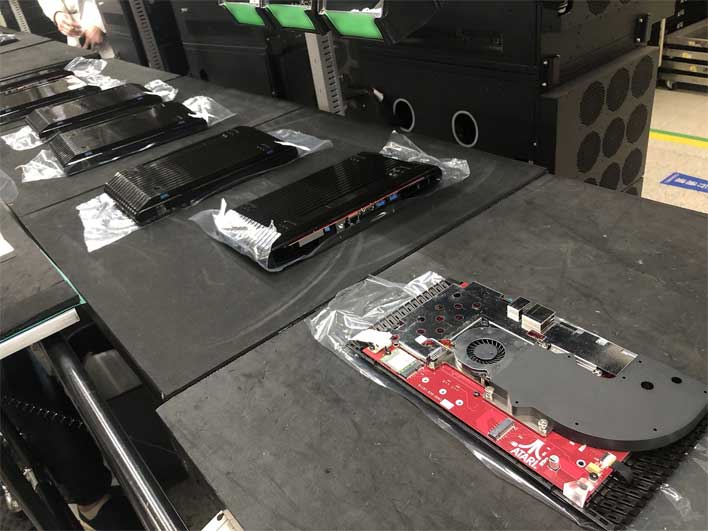 The images show the console with its "classic" woodgrain finish that is a throwback to the old Atari consoles from the early days of home gaming. Atari notes that these consoles are the "new and improved" Atari VCS pre-production dev kits. It says that many of the kits it built are now in the hands of developers and that more will go out this week.

Among the visual differences between the improved console and the original are streamlined, red Atari VCS PCB boards. Images shared of past versions used navy blue boards inside. The plastic housings used in this batch of consoles, however, aren’t updated to the final finish. The video linked above is a run-through of the updated dashboard build that was filed at Atari HQ. It shows a pre-production Atari VCS connected to a TV/monitor and powered up with an internet connection and Atari Modern Controller. Atari notes that the video shows the same hardware and WIP software build that content partners are working with. Atari VCS has had a rough time with delays and its lead architect left after he wasn't paid for six months.