ASUS is brimming with wireless routers across a wide spectrum of speed and capabilities, and it just added another one to the mix—the TUF Gaming AX3000 V2. While this one doesn't fit within its Republic of Gamers (ROG) brand, it brings an aggressive aesthetic to the router scene and, more importantly, offers lots of throughput.
The TUF Gaming AX3000 V2 is a dual-band Wi-Fi 6 (802.11ax) router. ASUS says it's capable of delivering speeds of up to 574Mbps on the 2.4GHz band and up to 2,402Mbps on the 5GHz band. Hence the AX3000 designation, though we always like to point out that you can't actually combine the different bands into a single super-connection.
Those are still fast speeds, though, and being a Wi-Fi 6 model means it can handle multiple simultaneously connected devices better than routers based on earlier wireless protocols (like Wi-Fi 5). That's because of support for OFDMA, or orthogonal frequency division multiple access. Cisco uses the analogy of a delivery truck explain the benefits of OFDMA. 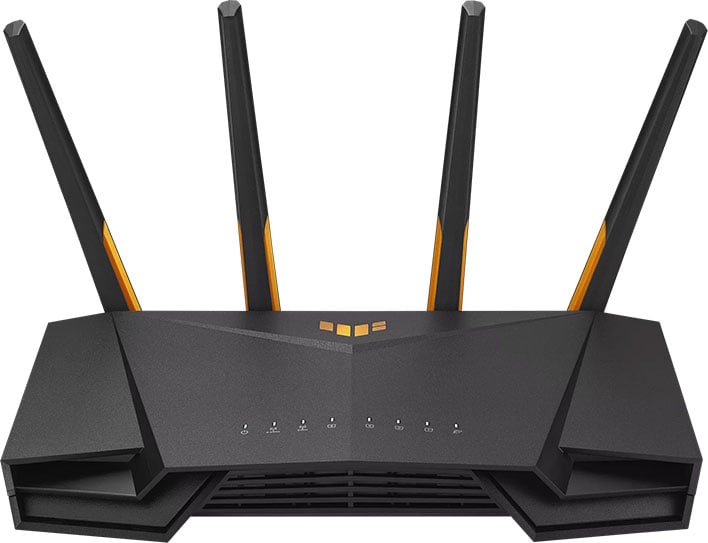 "With Wi-Fi 5, each 'truck' could carry only a single user's cargo. But with Wi-Fi 6 and OFDMA, the truck can be loaded with multiple users' cargo loads. Also, its drop-off schedule can be optimized for speed and efficiency. OFDMA divides a Wi-Fi channel into smaller frequency allocations, called resource units (RUs). An access point can communicate with multiple clients by assigning them to specific RUs," Cisco explains.
It also supports beamforming, which can deliver stronger signals to devices. ASUS doesn't make any claims about this router's range, but it does sport four fixed antennas. It also features ASUS AiMesh support to create a whole-home mesh network when combined with another (or multiple) AIMesh compatible routers. 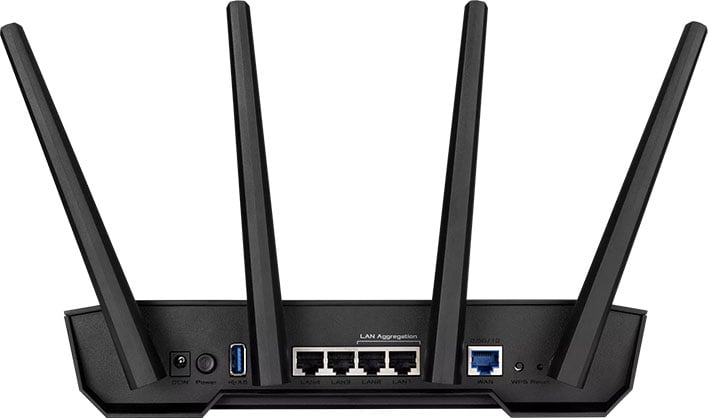 For wired connections, there's a 2.5Gbps WAN port and four 1Gbps LAN ports. Additionally, two of those LAN ports can be aggregated into a 2Gbps connection. So in essence, there's lots of bandwidth on tap for both wired and wireless connections. Users will also find a USB 3.2 Gen 1 port on the back for sharing storage or a printer across a home network.
If there's a knock here, it's that ASUS opted for the Wi-Fi 6 standard instead of Wi-Fi 6E. That's not necessarily a deal killer, though. The market is still being fleshed out with Wi-Fi 6 compatible devices, so it's not like the TUF Gaming AX3000 V2 will be obsolete any time soon.
ASUS hasn't said when this router will be available or how much it will cost. As a point of reference, the TUF Gaming AX5400 is available on Amazon for $199.99.