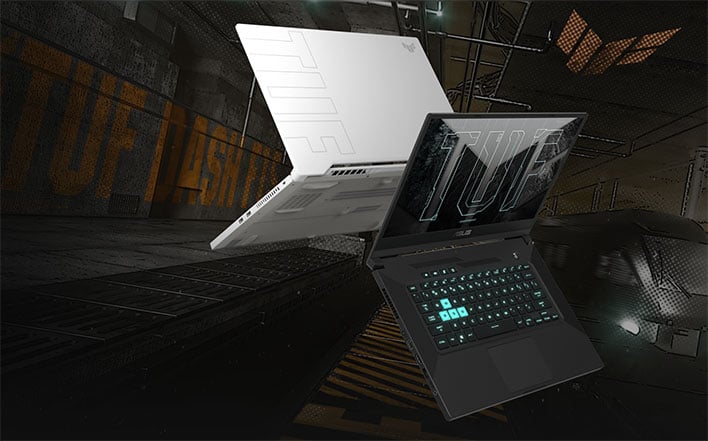 ASUS is getting ready to launch a new laptop line, the TUF Dash F15 series, which will pair select 11th Generation Intel Core i5 and Core i7 processors (Tiger Lake-H) with up to an NVIDIA GeForce RTX 3070 GPU in an ultra-thin, light, and durable package. Ahead of the retail launch, one of the configurations with a Core i7-11375H has popped up in a leaked benchmark.
The Core i7-11375H is a 4-core/8-thread CPU with a 3.3GHz base clock and 5GHz max turbo frequency.  it also features 12MB of Intel Smart Cache (L3 cache). As part of the H-series lineup within the Tiger Lake family, it is aimed at higher performing laptop (and perhaps some mini PC) models, and indeed it seems to be a good fit for the TUF Dash F15, based on the benchmark leak. Have a look... 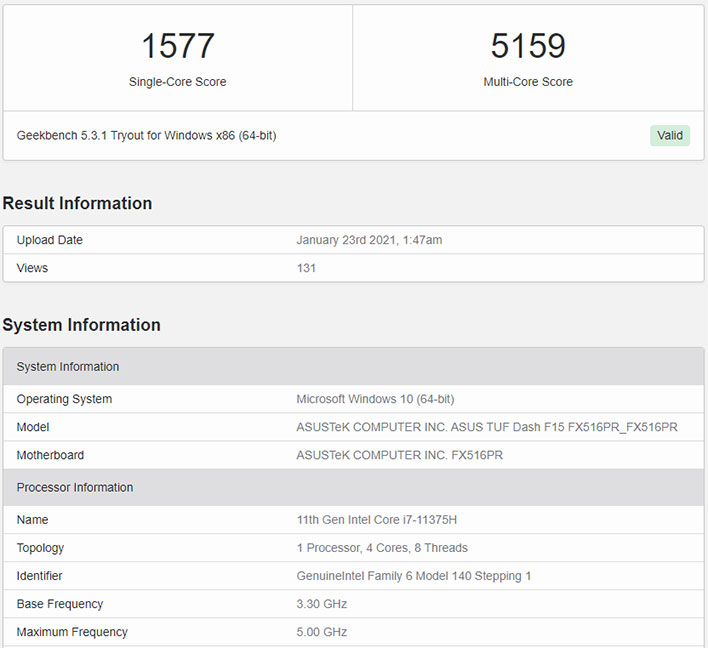 Part of what makes this interesting is that there has been so much attention paid to laptop announcements featuring AMD's latest Ryzen 5000 series of mobile CPUs paired with NVIDIA's GeForce RTX 30 mobile series. On paper, those models should pack a mighty performance punch. Zen 3 combined with Ampere? Yes, please!
In this case, however, it is Tiger Lake-H that accompanies Ampere, in a thin and light form factor. As benched, it scored 1,577 in the single-core test and 5,159 in the multi-core test. That gives us some preliminary data to compare with other CPUs, since we have not tested anything with a Core i7-11375H ourselves.
Looking at Geekbench's single-threaded score ranking, the Core i7-10750H averages 1,143. The validated test run for the TUF Dash F15 with a Core i7-11357H has it scoring nearly 38 percent higher. And it is around 44.5 percent higher than the average score for AMD's Ryzen 9 4900HS, which is shown as 1,094.
Obviously AMD's newly announced mobile Ryzen 5000 series CPUs will offer better performance than the Ryzen 4000 series, but so far the leaked scores show Intel is keeping pace. For example, the most recent entry for a Ryzen 9 5900H has it scoring 1,556 in the single-core test, giving Intel's CPU a 1.35 percent edge. In multi-core testing, however, the AMD part scores 8,827 to Intel's 5,159.
In any event, for workloads that favor single-threaded performance, the TUF Dash F15 looks to be an intriguing product when it arrives.