Brace yourself folks, because at long last here come the gaming laptops infused with NVIDIA's latest generation GeForce RTX 30 series GPUs in mobile form, based on Ampere. Kicking things off, Best Buy is now accepting preorders for an ASUS ROG Zephyrus (GA503QR-211.ZG15) that pairs a Zen 3 CPU with an Ampere GPU.
Before we get to the guts, let's talk about the display. This is a 15.6-inch model with a QHD (2560x1440) panel. Normally on laptops we see manufacturers opt for either a 1080p or 4K resolution display, but in this case, we get a nice in-between (1440p), with a fast 165Hz refresh rate to boot. And it offers 100 percent coverage of the DCI-P3 color space.
To help take advantage of the display's resolution and fast refresh rate, the ROG Zephyrus pairs a Ryzen 9 5900HS CPU with a GeForce RTX 3070 GPU. The CPU is based on AMD's Zen 3 architecture and features 8 cores and 16 threads humming along at 3GHz to 4.6GHz, with 16MB of L3 cache. 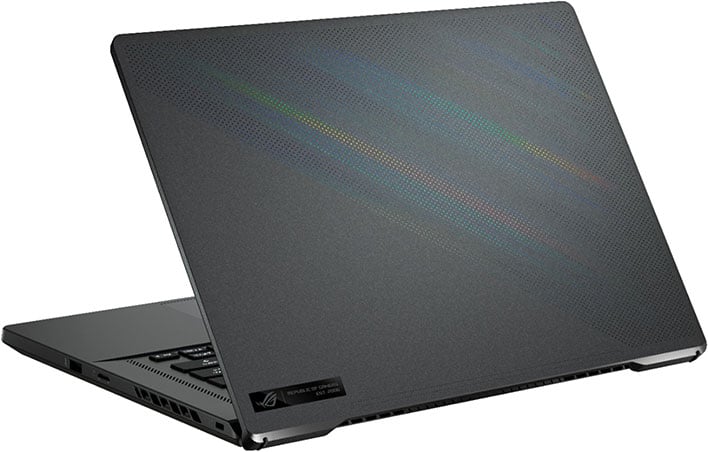 As for the GPU, it is the 8GB model rather than the 16GB variant. The listing does not indicate the power rating or clockspeeds, but given that this is a relatively thin and light package, we have a strong hunch its on the lower end. For reference, NVIDIA's mobile GeForce RTX 3070 GPUs can be configured from 80W to 150W (or even a little higher), with corresponding clocks ranging from 1,245MHz to 1,710MHz.
Nevertheless, this is a strong pairing for high-end gaming. Other features include 16GB of DDR4 RAM and a 1TB NVMe solid state drive, all wrapped in a package that measures just 0.78 inches thick and weighs 4.21 pounds.
You also get Wi-Fi 6 (802.11ax) connectivity, an RGB backlit keyboard, a fingerprint reader, and six speakers powered by Dolby Atmos. There does not appear to be a built-in webcam, though, so keep keep that in mind if that is something you need.
You can preorder this ROG Zephrus configuration now for $1,799.99 at Best Buy.