ASUS and NVIDIA have jointly announced the fastest gaming monitor on the planet, the ROG Swift 500Hz. As revealed in the model name, the display rocks a wicked fast 500Hz refresh rate, so if you lose an intense esports competition, it won't be because the display was holding you back. It refreshes nearly 39 percent faster than a 360Hz panel.
"In competitive, intense firefights, every single millisecond counts. The ROG Swift 500Hz draws frames more than eight times faster than typical 60Hz displays in a single second, which means you have that much more time to get a leg up on your opponent in esports titles like Counter-Strike: Global Offensive, Valorant, Overwatch, and Rainbow Six Siege," ASUS says.
Today's GPU hardware isn't going to push 500 frames per second in a graphically demanding game with all the image quality settings cranked up. However, esports gaming is typically a different beast. Competitive players prioritize frame rates and latency over everything else, and the ROG Swift 500Hz focuses on those things. 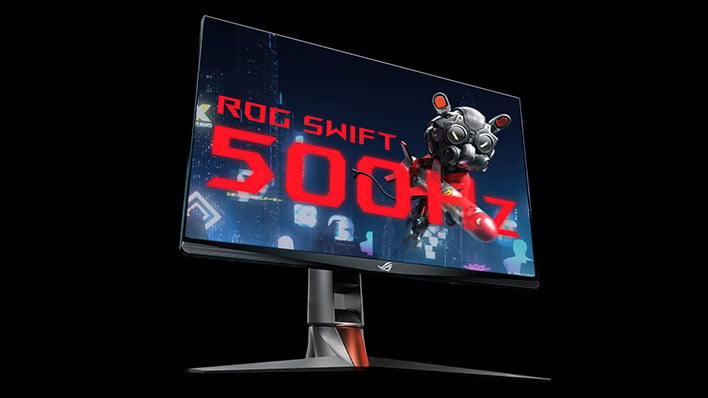 What's on tap here is a 24.1-inch display with a 1920x1080 resolution. It's utilizing what ASUS and NVIDIA say is a new Esports TN (E-TN) panel that offers 60 percent better response times than standard TN screens. Other specifications have not yet been revealed, including the brightness level and contrast ratio, though it does boast a G-Sync mode and offers NVIDIA Reflex Analyzer support.
Will it make you a better gamer? That's always been the debate as manufacturers continue to push higher refresh rates and reduce latency. When slowed down, there's a compelling argument to be made. Have a look...

Whether it makes a discernible difference at full speed, we're not equipped to answer that (because we haven't tested this monitor yet, and, quite frankly, we're not competitive esports players). But we have examined NVIDIA Reflex (on a 360Hz monitor) and did find a measurable difference.
It's not clear what company is behind this new E-TN panel. Back in January, we wrote about a company called BOE that showed off a 27-inch panel with a 500Hz refresh rate. However, NVIDIA gives a shout out to AU Optronics in its announcement, perhaps hinting at it being the manufacturer.
There's no mention of a price or when the ASUS ROG Swift 500Hz will be released.