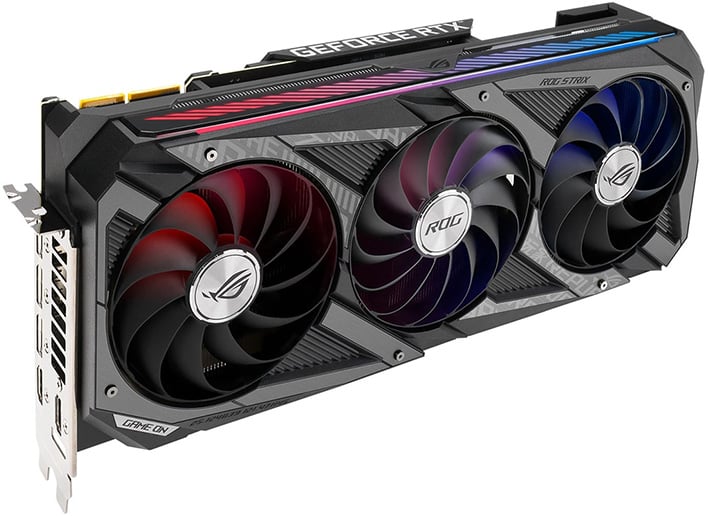 Hey, did you hear? NVIDIA is getting ready to unveil a new generation of GeForce RTX graphics cards, based on its Ampere GPU architecture. That's not a serious question, because if you have even a passing interest in tech, it would be near impossible to avoid all of the leaks and rumors. Here's one more—with a launch now imminent, a leaked press release details what ASUS is planning to unveil tomorrow, on the custom GPU front.
Starting at 12:00 pm ET (9:00 am PT) today, NVIDIA will livestream the launch of its GeForce RTX 30 series, on its Twitch channel. The company is expected unveil three SKUs, those being the GeForce RTX 3090, GeForce RTX 3080, and GeForce RTX 3070. And of course NVIDIA will be offering Founders Edition models of its upcoming cards, while its add-in board (AIB) partners will debut custom cooled variants.
The folks at Videocardz got their mitts on a press release from ASUS that is scheduled to go live tomorrow. Assuming it's both real and representative of the final text, ASUS will come out of the gates swinging with custom options for all three SKUs.

"These new GPUs bring buffed-up cooling, PCBs, and power design to complement the new NVIDIA Ampere architecture. From competitive action to high-res immersion, this lineup delivers the latest and greatest in 3D gaming performance," the press release states.
As seen in the press renders above, some of these designs will sport three-fan cooling solutions, housed in a new shroud with metal accents. The middle fan features a full-height barrier ring and 13 fan blades to provide static pressure through the heatsink fins and onto the GPU, while the outer fans both have 11 blades and half-height barrier rings. This is to facilitate "more lateral dispersion and to provide better airflow through the cooling array."
"Turbulence between fans is reduced thanks to a reversal of the center fan’s rotational direction," ASUS explains.
Other features include top-shelf capacitors, chokes, and power stages, along with RGB lighting, all jammed into a 2.9-slot footprint (so it effectively takes up three slots).

ASUS also plans to offer dual-fan and triple-fan TUF Gaming models. These will also feature a new shroud, made of metal, along with "components selected based on their durability and performance." That means the chokes, MOSFETS, and capacitors meet military-grade certification, in case that matters to you. ASUS also subjects its TUF Gaming cards to a 144-hour validation trial.
These cards will be available sometime this month. Pricing is not yet known.