Update (12/29/21):
It's official—a reversed capacitor is the culprit. ASUS reached out to Hot Hardware and confirmed its preliminary finding, and provided a statement that it is sending out to customers. Here's what it says...

To our valued ASUS Customers,
ASUS is committed to producing the highest quality products and we take every incident report from our valued customers very seriously. We have recently received incident reports regarding the ROG Maximus Z690 Hero motherboard. In our ongoing investigation, we have preliminarily identified a potential reversed memory capacitor issue in the production process from one of the production lines that may cause debug error code 53, no post, or motherboard components damage. The issue potentially affects units manufactured in 2021 with the part number 90MB18E0-MVAAY0 and serial number starting with MA, MB, or MC.
You can identify your part number by referring to the product packaging: 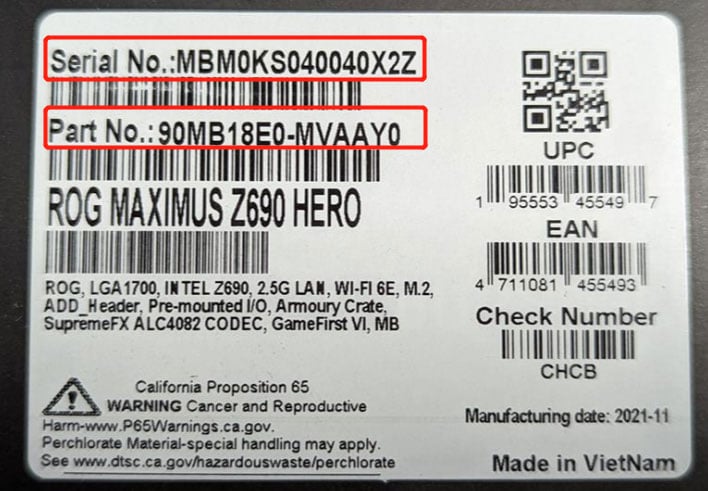 As of December 28, 2021, there have been a few incidents reported in North America. Going forward, we are continuing our thorough inspection with our suppliers and customers to identify all possible affected ROG Maximus Z690 Hero motherboards in the market and will be working with relevant government agencies on a replacement program.
Thank you so much to everyone for your patience and support while we are working through the replacement program.
If you have any questions or concerns please feel free to contact ASUS customer service.

So there are two ways to check if you're affected. One is to identify the backwards capacitor, and the other is to look and see if your motherboard's part number falls within the affected range, as outlined above.
It sounds like ASUS is in the process of issuing a recall. In the meantime, if you own an affected motherboard, we recommend you reach out to ASUS and request an RMA.

It appears there is a manufacturing defect affecting some ASUS ROG Maximus Z690 Hero motherboards for Alder Lake, as multiple users have reported that a section of their boards have burned up (quite literally). Yet others have not seen their boards go up in smoke, but have run into a curious error code that, when lacking a charred section of the board, could serve as a red herring.
Over on the ASUS support forum, user MaximumROG57 posted the above photo (and a couple others) showing a section near the DIMM slots that fried during usage. The user says they purchased the board from Newegg as part of a combo with G.Skill DDR5-6000 RAM. They went on to explain that the board initially seemed to work fine, until it didn't.

"Everything worked great for a day or two (no memtest done), I may have heard a clanky noise and assumed it was the fab clip from the air cooler being too close to the top case fan and chose to review it the next day after a full shutdown and restart. Next day I get stuck on boot with QCODE 53 and QLED Orange (first time) and noticed a penny sized burn mark under the bottom right of the QLED, burnt to a crisp almost (top side, lot of soot) and melting the QCODE box a little," the user stated.
Another user on Reddit claimed they went through two of the same motherboards in three days, once of which "caught fire." And in yet another Reddit thread, another ROG Maximus Z690 Hero owner posted pictures asking if anyone knew why a certain part of the board would smoke. The part they referenced is the same section that charred in the pic above.
There could be a simple albeit unfortunate reason for the reported failures: a key capacitor being installed backwards on the motherboard. 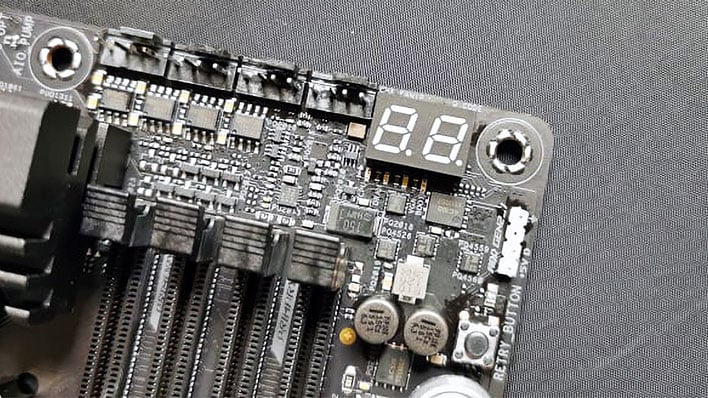 Someone close to the situation tells us they more than a dozen of these motherboards, and each one of them has the offending cap installed backwards. You can see it in the photo above that they shared with us—it's the cap just above the right-most DIMM slot with "150" written on it.
Here's another look... 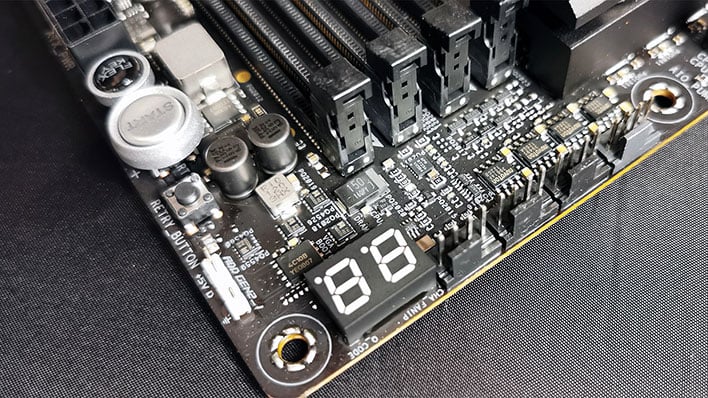 A 53 QCODE error typically means there is a problem with the memory. It's not clear if that is factoring into this issue or not. Either way, however, it seems as though a backwards cap is the either the real culprit, or exacerbating some other issue. The one thing all the photos showing a burned up section of the motherboard have in common is a seemingly upside-down installation of the cap.
This could be a simple as someone mistakenly loading the caps backwards into the machine for assembly, for one or more batches. These are presumably solid aluminum electrolytic capacitors with positive and negative electrodes, and reversing the polarity could cause issues.
We can't say for certain if that is issue, but if you purchased this motherboard, we highly recommend checking the orientation of the above cap to err on the side of caution.