Are You Cool With Your Antivirus Software Bundling A Crypto Miner? Because Now It's A Thing


The world of cryptocurrency and NFTs has been booming as more companies begin to embrace them. GameStop recently announced that it will be attempting to utilize NFTs as it continues to try and turn things around. Blockchain Ethereum is looking to change how it doles out rewards in order to massively reduce energy consumption by 99.95 percent. It also seems that at least two companies in the business of keeping your PC safe from viruses wants to get its piece of crypto-pie as well.

While there are two AV programs giving customers the option of opting in to mining crypto on their protected PCs, both are owned by NortonLifeLock. NortonLifelock was acquired by Symantec Corp. in 2017, which changed its name to NortonLifeLock in 2019 after selling the Symantec brand and some enterprise software to Broadcom. Avira was then bought by NortonLifeLock in January 2021. So, NortonLifeLock is the parent company that owns both the Norton product line and Avira (as well as some other products).

In July of last year, NortonLifeLock introduced Norton Crypto to its customers allowing them to mine Ethereum during their PC's idle time. Then in October Avira followed suit allowing its customers to do the same by utilizing Avira Crypto. Both options require the user to opt-in to the feature. If you are a customer of either antivirus program and are not wanting your PC to be used to mine crypto and have not opted in, you can rest easy.


Anyone with a Norton 360 plan should have the option to utilize the Norton Crypto feature if your computer meets the minimum system requirements (namely the GPU) and you live in the U.S. You can also mine on every computer that has Norton 360 installed with an active subscription. The maximum number is only limited to however many computers you have on your plan.
Do be aware that Norton will have control of the settings when it comes to mining, but are looking at ways it could potentially make the settings available to users in the future. Avira customers can tap into this resource as a free feature with Avira Free Security, Avira Antivirus Pro, Avira Internet Security, and Avira Prime for users in the U.S., Canada, and the United Kingdom. 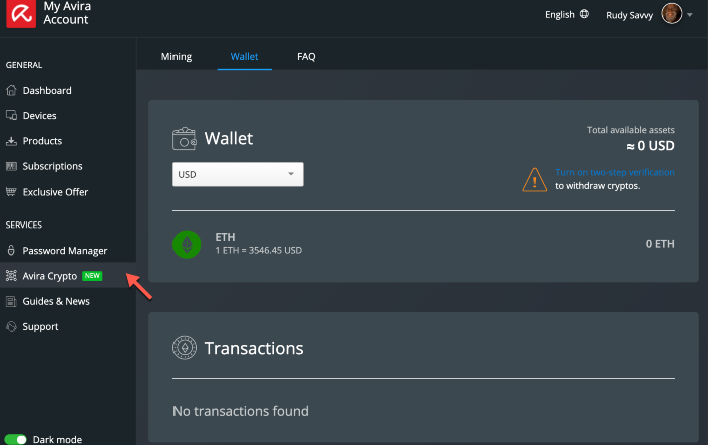 Both Norton and Avira warn that utilizing the mining option is not for every user. The hardware requirements listed for both include having an NVIDIA graphics card with at least 6GB of memory. So, if you have a PC that has an integrated GPU, or have an older gaming PC with a lower end GPU, you may want to steer away from using your PC to mine crypto with this feature. But for gamers who may have an older gaming rig just collecting dust, depending on what GPU you have in it, you may be able to put it to work for you using this method.

If you are wondering if you will need a crypto wallet to take advantage of the feature, both Norton and Avira will create a secure digital Ethereum wallet for each user. The key to the wallet is encrypted and stored securely in the cloud and only you will have access to the wallet. Both support transfers of Ethereum from your digital wallet to Coinbase. You will also want to take note that there are fees associated with coin mining. While the feature is included with your plan, you will incur coin mining fees as well as transaction costs to transfer Ethereum. You can check the FAQs of either software provider to find out more about those fees.

The ability to mine crypto on your PC via your antivirus software may seem to some as an easy avenue for those less tech savvy to be able to dip their toes into the crypto market, while protecting their PC at the same time. Others may view it as a slippery slope that will have those less savvy users calling tech support or friends to figure out why their PC is slow or bogging down in some way. While others may view it as placing a target on their backs for hackers looking to cash in on their crypto ventures. And still others may simply say, "Please stick to protecting my PC, and stay focused on thwarting threats!"

Regardless of anyone's opinion, the fact that there are now multiple antivirus products that allow its customers to mine crypto  is a reality. Time will tell if other antivirus companies follow suit, but until then if you are a customer of either you have the option to make a little crypto on the side.