Google has addressed concerns over possible stalking using Apple's AirTag with a new detection app. The Tracker Detect app looks for item trackers that are compatible with Apple's Find My network and that are potentially abusing the device to stalk someone.

AirTags recently made the news as car thieves in Canada were abusing the tracking devices to track high-end cars for the opportune time to steal them. But the thought of being tracked by one of these devices as a means of stalking another human being is another concern in and of itself. It is this harrowing concern that caused Google to create an app called Tracker Detect. The app provides a way for those who fear they are being stalked to scan the immediate area and identify if someone is using an Apple AirTag, or another tracking device, to track them.

Google has made good on its promise to extend the ability to identify nearby AirTags and Find My trackers to Android users in order for them to tell if they are perhaps the victim of a stalker. While this may seem like an app for the paranoid, there are plenty of people that can attest to the legitimate fear that comes with being stalked. Having the ability to scan the immediate area and know if there is a device nearby potentially tracking them can give a victim both peace of mind and a means of early detection. It is not a stretch to think of a stalker placing an AirTag underneath a car's bumper or other location in order to track a person's locale, much in the same way car thieves used them in Canada. 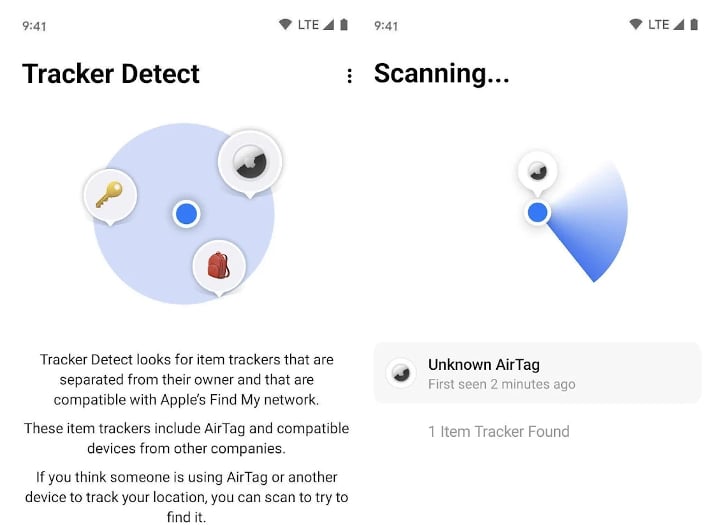 Apple's AirTags are intended to make finding someone's lost keys, or other items much easier. This can be very handy for the absent minded person who continually misplaces their keys. The tracking device is small enough to be placed on or in about anything one would want to keep track of. It is this compact size that has had some concerned over how the device could be used. Privacy advocates have voiced concerns that the tracking device in the wrong hands, such as a stalker or estranged domestic abuser, could lead to a dangerous outcome. Being an AirTag is fairly cheap as well, $29 a piece, it makes the device a very alluring means of keeping track of another individual.

The Tracker Detect app is designed to scan the nearby area for any device that may be using the Find My app on an iPhone. It will also alert the user if an unknown device has been near a user for more than 10 minutes with a chime. If a device is identified, the app then gives the user instructions on how to remove its battery, as well as recommendations that they should alert law enforcement if they believe the tracking device was in fact being used to track them.

The app has seemingly been met with some harsh reviews on the Google Play Store. Complaints range from the app not doing background scans and not saving previously found AirTags, to those being concerned you have to tell the app to scan and it not being done automatically. But if you are concerned for your safety in regard to possibly being stalked, the app should give you an extra bit of security regardless.

As technology continues to improve and innovate in ways that can blur the lines of privacy and safety, there will always be those out there that will abuse it. Apps such as Tracker Detect are not perfect in that they will not be able to guarantee a person's safety, but they are at least something to combat attempts of those abusing technology in a heinous way.