A week ago, two of the most prolific leakers when it comes to future Apple hardware coalesced around what features will be going into the next-generation MacBook Pro laptops. At the time, both analyst Ming-Chi Kuo and Bloomberg’s Mark Gurman agreed that redesigned 14-inch and 16-inch MacBook Pros are incoming with faster Apple Silicon SoCs, MagSafe charging, and a distinct lack of the unloved OLED Touch Bar.

Gurman is back at it again today with some insight into Apple's next entry-level MacBook Air laptop. If you recall, Apple just a few months ago introduced a new MacBook Air, which was the first of three new Macs to make the switch to Arm64 architecture with the Apple M1. However, the current MacBook Air only had its internals redesigned... the exterior remains the same as it has been since it was last redesigned back in 2019.

The new MacBook Air, which is due in late 2021 or early 2022, will feature an all-new design. Interestingly, the MacBook Air will retain a 13-inch display panel, which would put a bit more daylight between it and the next-generation MacBook Pro, which will reportedly be offered with a 14-inch panel in base configurations. 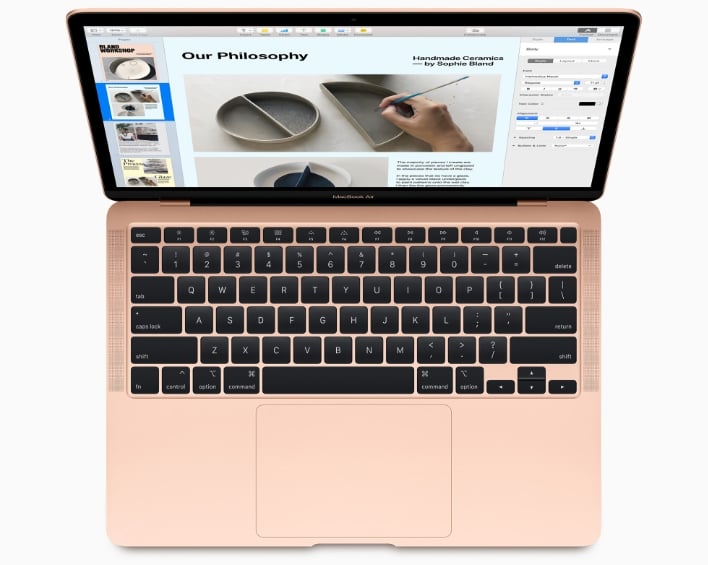 However, while the display size will remain the same, the overall dimensions of the laptop are expected to shrink due to thinner display bezels (which are rather thick, especially at the top, on the current MacBook Air). The reduced dimensions also mean that the device will be thinner this time around, and Apple is also expected to slightly reduce the weight of the device. The current MacBook Air isn't exactly a heavyweight at 2.8 pounds, so it will be interesting to see how much lighter it can get.

Gurman also provided some insight into some other rumblings in the greater Mac world, both near-term and further out into the future. On the more immediate front, the next-generation MacBook Pro family is expected to bring back the SD slot, which was unexpectedly removed during Apple's last major 2016 redesign. Looking a bit further down the road, Apple is said to be working to bring Face ID technology from its iPhone and iPad Pro families to its Macs as a secure biometric authentication method.

Finally, as has been expected for quite some time, Apple's hardware team is working to bring integrated 5G connectivity to its MacBooks, which has never been offered as an option from the company.