Apple today released a product that will probably leave many people scratching their head in bewilderment. The company has announced that is now issuing “Everything Apple” gift cards, which can be used across its entire product portfolio including hardware products like MacBook Pros and iPhones to digital items like apps and music.

Everything Apple is a new gift card, and customers will be able to use it anywhere you would typically purchase something direct from Apple. That means that no matter if you’re walking into an Apple Store to buy a MacBook Pro, ordering a new Apple TV over the phone, buying a HomePod with the Apple Store app, or buying a new game via the App Store; you can use the exact same gift card for everything. There are eight different designs that can be chosen for digital versions of the Everything Apple gift card, while physical versions will be available in five designs.

This seems like such a simple concept, but this simplicity has seemingly been lost on Apple for over a decade.

Now we know what you’re thinking: hasn’t this always been the case with Apple gift cards? Well, the answer is a blunt “No”. Apple up until this point has sold two separate types of gift cards. Apple Store gift cards could be used for the purchase of hardware products from the Apple Store, Apple.com or within the Apple Store app. On the other hand, App Store & iTunes gift cards could only be use for making digital items (apps, games, music, etc.) or paying for services like Apple Music or extra iCloud storage.

Apple is now no longer selling either the Apple Store or App Store & iTunes gift cards directly for simplicity’s sake. However, those of you that are still holding on to either physical or digital version of those cards can still redeem that at any time without issue. They won’t expire, and you won’t have to worry about losing any value.

One positive aspect of this development is that the App Store & iTunes gift card can now be used to purchase Apple hardware as well. In essence, it now has the full benefits of the new Apple Everything gift card. So, for those of you who have been accumulating those gift cards over the years during the frequent 10%, 15%, and 20% off promotions that retailers throw, you have a pretty nice discount already baked-in towards the purchase of new Apple hardware. 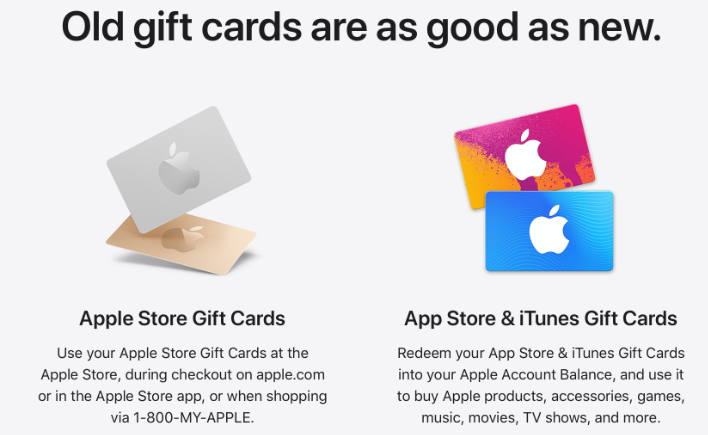 It also means that if your Aunt Josephine gave you a $100 App Store & iTunes gift card for graduation, and you really wished she had just gotten you an Apple Store gift card so that you could put it towards some AirPods, now’s your chance.

But Of Course, There’s Bad News As Well

While Apple has been pretty adamant about providing discounts on its own App Store & iTunes gift cards, and retailers have been giving discounts of up to 20% on them, those deals are not likely to return. A 10% to 20% discount to Apple on digital sales is not that much of a concern to Apple. But when you start giving those kinds of discounts when the purchase of hardware is [likely] to be involved, the company is likely to get very stingy. So, you can take solace in the fact that your old iTunes gift cards now work just fine on hardware purchases, but don’t expect to see any of those sweet discounts on the Everything Apple gift card anytime soon.