Apple Watch Series 7 Preorders Now Open, Here's What To Know Before You Buy One

Starting today you can preorder the Apple Watch Series 7. The latest-generation smartwatches are being touted by Apple as being heavy on features and light on price. Are they really? Let's have a look.

The Series 7 brings with it the largest and most advanced display on an Apple Watch thus far. The borders have been reduced by 40 percent to allow 20 percent more screen than the previous Series 6. The screen itself is 70 percent brighter indoors when your wrist is down, and you don’t need to raise your wrist because the display is always on, which is neat.

Apple also redesigned the buttons across the system to take advantage of the larger display. This should make it easier when using apps like Calculator and Timer when trying to press those numbers. Along with the redesigned buttons comes a new QWERTY keyboard, an Apple Watch first. The keyboard will let you tap or slide from letter to letter with QuickPath and uses machine learning to predict the word you are trying to type.

When it comes to fitness the Apple Watch has always been a solid choice. The watch is rated to be water resistant up to 50 meters with an IP6X rating for water. You can also keep track of your heart rate while receiving heart health notifications. Users will be able to track their sleep schedule, measure their blood oxygen levels, and generate an ECG similar to a single-lead electrocardiogram. 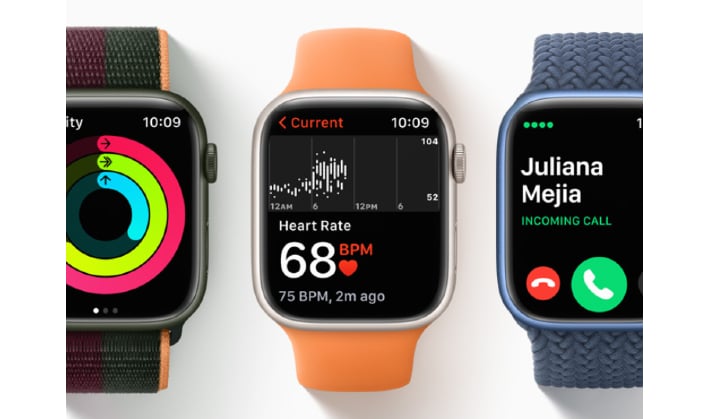 Disappointingly, one area where the Series 7 did not make an improvement was the battery life. It would have been nice if Apple had included a larger battery along with the bigger display size, but instead they chose to keep it on par with last gen watches at around 18 hours of battery life.

The Apple Series 7 Watch is available to preorder in 2 different sizes, 41mm or 45mm, and has a starting price of $399. All in all, Apple has done a nice job with the larger display and added features. While the battery life could have been better, this is still a very nice option for anyone with an iPhone, just perhaps not enough of an upgrade if you already own an Apple Watch Series 6.