At last month’s big iPhone 13 keynote event, Apple also revealed its next-generation Apple Watch Series 7. However, unlike the other products announced at the event, the company said that Series 7 wouldn't launch until later this fall.

Well, it looks as though the wait isn’t that long after all, as Apple confirmed today that Series 7 preorders will kick off on Friday morning (October 8th) at 8 am ET. The smartwatch family will ship the following Friday (October 15th).

The Series 7 betters its Series 6 predecessor with larger 41 and 45 mm displays (up slightly from 40mm and 44mm, respectively). In addition, the bezels are thinner all around (1.7mm), and content on the display wraps slightly towards curved display edges. Although this wasn’t a problem with the Series 6, Apple says that the always-on display mode with the Series 7 is now 70 percent brighter. 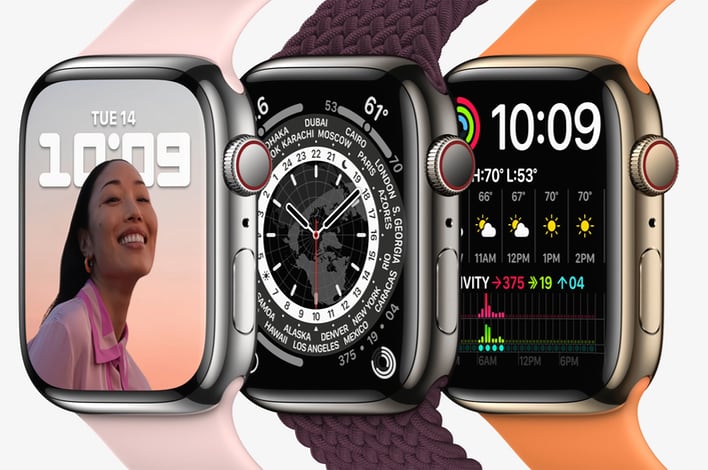 Apple hasn’t talked about performance with the new S7 SoC found in the Series 7, but some code sleuthing revealed that it’s closely aligned with the S6 in the Series 7. The S6 provided a 20 percent performance boost over its S5 predecessor, and we’ll be eager to see if Apple can eke out similar gains this year.

Unfortunately, Apple has done nothing to improve the battery life of the Series 7, which remains mediocre compared to its competitors. The Series 7 can only last around 18 hours per charge, a mark that hasn’t changed in years. However, Apple does say that the Series 7 can now charge 33 percent faster than Series 6, and the smartwatch charging cable now uses a USB-C connector.

The Apple Watch Series 7 leads the smartwatch family, with a price tag starting at $399. The Apple Watch SE remains the mid-range choice with a starting price of $279. Inexplicably, the Apple Watch Series 3 remains in the lineup at $199. At this point, we would have thought that the Series 3 would have been discontinued. The aging smartwatch has problems applying simple software updates, and it should have been replaced by the Series 4 or Series 5, in our opinion. However, Apple seems adamant in keeping the device around, which first launched back in 2017.