Rumors regarding Apple’s plans to enter the AR / VR / XR / MR technology realm have been bubbling up for at least half a decade. Earlier this week, Bloomberg’s resident Apple Insider Mark Gurman helped put some flesh on the bones of what we already think we already know, via his weekly subscriber email. Probably the biggest news revealed by Gurman is that Apple’s mixed reality (MR) headset will be the Cupertino’s firm’s next big product launch, and is due in 2023. Moreover, some fascinating insights into the debut device have been gleaned from recent job listings.
According to Gurman, some of the upcoming Apple headset’s features and specs are already set in stone. For example, this is going to be a high-end (high-priced) device, probably set to retail somewhere in the $2,000 to $3,000 region. For the money, you should get some of the best hardware specs available. Displays are claimed to be the highest resolution ever in a consumer headset, and the headset will be powered by an Apple M2 chip, for example. Also, the device will feature at least 10, we previously reported 14, inside and outside tracking cameras, which are essential for mixed reality fidelity.
Some new details are that the headset will rely on a completely new operating system, which is dubbed realityOS. Apple is said to be preparing ports of its key apps such as Messages, FaceTime and Maps, with mixed reality interface and operational changes. Gurman says that this OS is almost ready for the finalized hardware—an important step which will help third parties ready their apps for launch too.
Among the newest news nuggets from Apple job listings, one hints at a video service being built for the new platform. The service will leverage 3D content, and is likely to be based upon the prior works and technology of NextVR, a company it acquired in 2020. 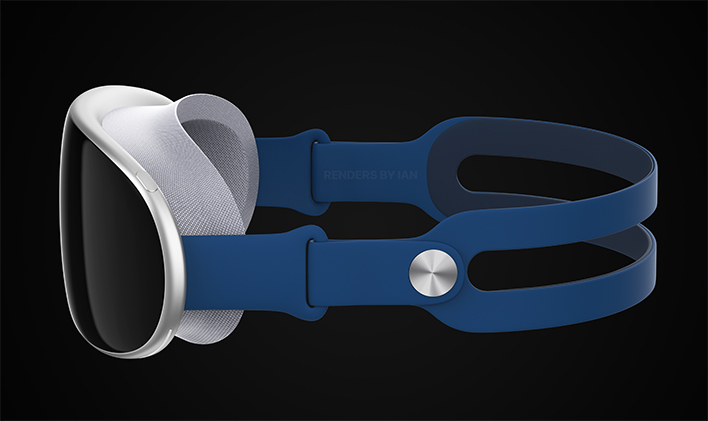 Another interesting job listing, highlighted by Gurman, is to work on the development of a 3D mixed reality (MR) world. Whatever this world will be called in the subsequent rapturous unveiling by Apple marketers, it won’t be ‘the metaverse’, however appropriate, catchy, and widely recognized the phrase may be.
It is difficult to know how Apple will be able to justify the quite outlandish pricing of its MR device to consumers. Other job listings hint that the headset, which may be dubbed the Apple Reality Pro or Reality One, won’t just be for content consumption and fun, but there will be some tools in its virtual environment for creators and productivity purposes alike.
All above product image renders created by 3D artist Ian Zelbo.