Kicking things off with FaceTime, Apple is adding Spatial Audio for a more immersive experience. In addition, voice isolation technology uses machine learning to filter out unwanted background noise, and Wide Spectrum mode allows you to hear the "entire symphony's worth of sound" during calls.

There's a new grid view with highlighted boxes around the currently-speaking participant, and Portrait Mode is now available, with a blurred background during video calls. In addition, you can now generate links for people to join FaceTime calls quickly via email, text, or any other way that you reach friends and family.

That leads us to the next big thing with FaceTime: support for FaceTime over the web. This opens up the iPhone experience to even more people outside the Apple ecosystem, including people on Android users. But, of course, even when using FaceTime over the web, your calls are still encrypted for security and privacy. 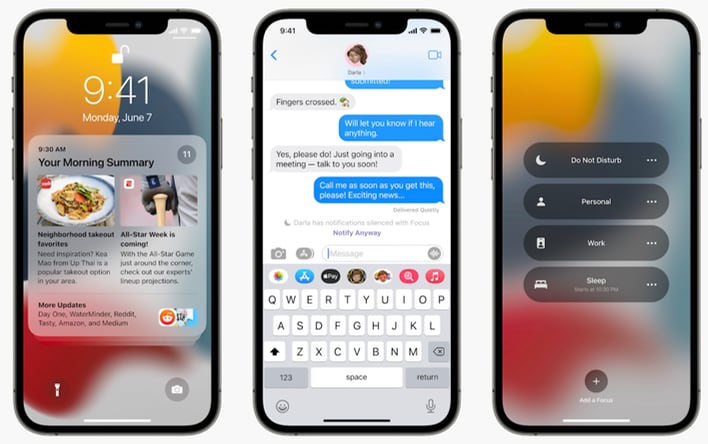 The Notifications experience has been revamped to help you keep track of the dozens, if not hundreds, of notifications that you receive during the day. The new Notification Summary prioritizes your notifications based on importance and presents them in an easy-to-digest format. You can quickly silence all notifications, and take advantage of new Do Not Disturb options to let people know that you'd rather not be bothered at the moment to focus on work or other tasks. 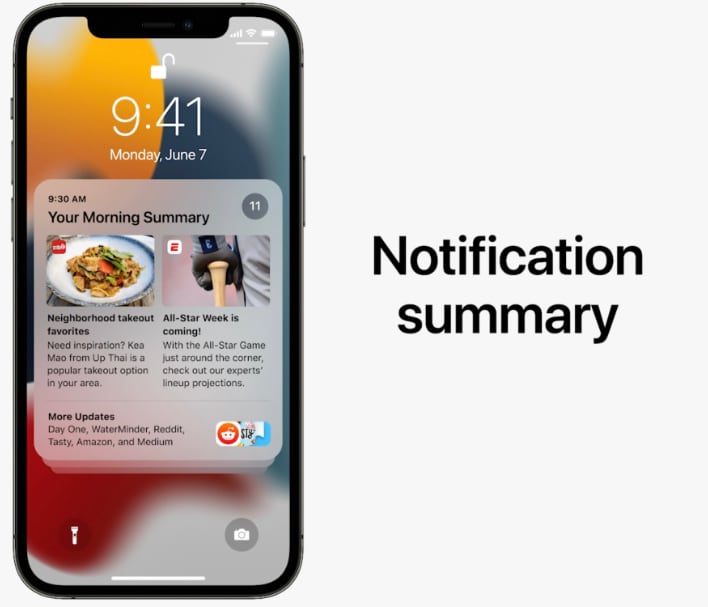 The Photos app is gaining a new Live Text feature, which can pull text from photos, including live links for phone numbers. In addition, you can now search through your Photos using the systemwide Spotlight feature. 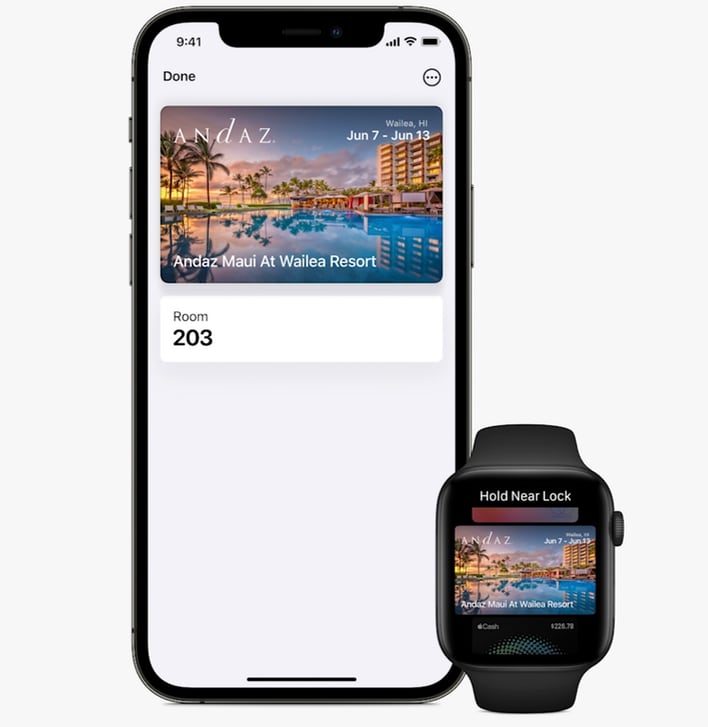 Other odds and ends include the ability to use the iOS wallet as a digital key to open doors in your home or even hotel rooms. In addition, you can even store your Passport or your driver's license (if your state decides to participate in the program). The data is, of course, encrypted, making it a virtual replacement for your physical credentials if you left your wallet behind by mistake and find flashing lights in your rearview mirror. 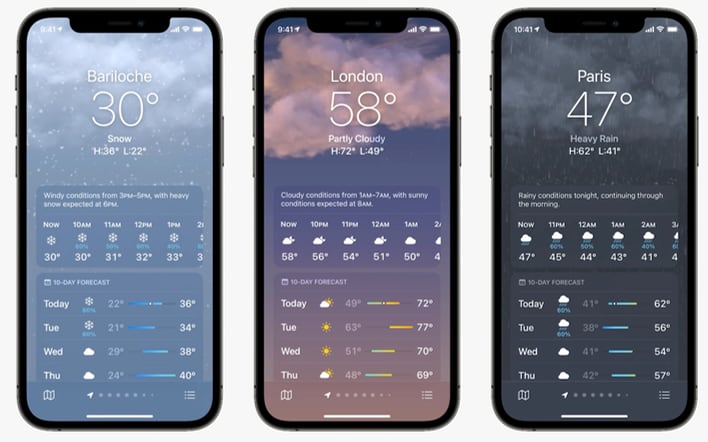 The Weather app has been completely revamped, taking the best of Dark Sky (which Apple acquired last year) and bringing it to all iOS users. As a result, you'll get new weather animations and high-quality weather maps (among other things). With this addition, long-time Dark Sky users will be able to finally ditch the separate app. 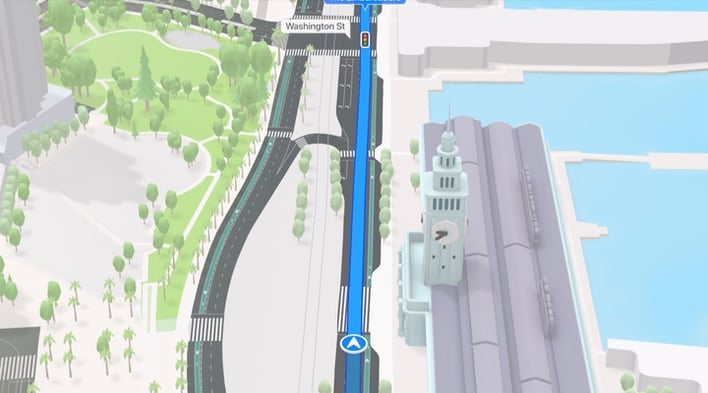 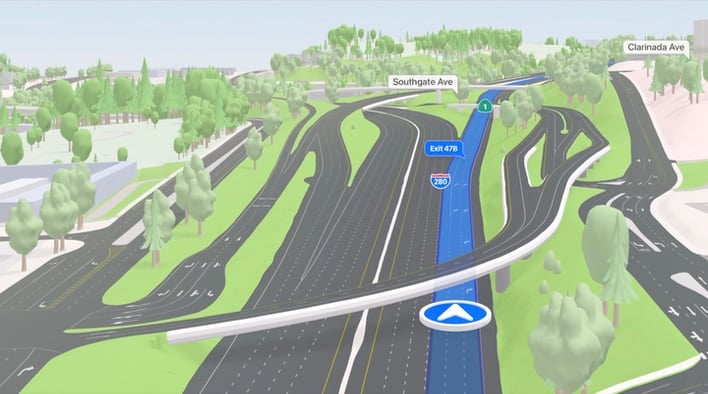 Finally, the Maps experience is getting a significant overhaul with richer graphics and landmarks to help better orient you during a drive. Things like vehicle lanes, bike lanes, turning lanes, and even crosswalks are represented on the map (in supported locations), which is a huge boon. In addition, overpasses and complex interchanges are rendered in 3D to give you a more representative look at how to navigate in unfamiliar areas. 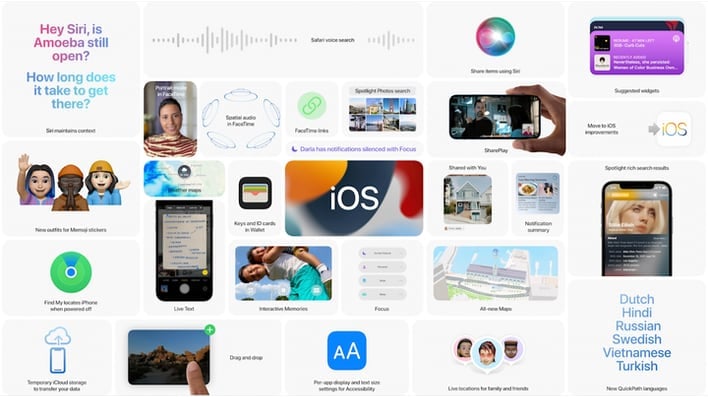 Apple's iOS 15 will be available to developers starting today, with a public beta to follow soon. iOS 15 will then launch for everyone this fall.