While the Epic Games trial rages on in the background, it seems Apple may be trying to deflect blame or guilt. Yesterday, the Cupertino-based company announced that the App Store stopped “more than $1.5 billion in potentially fraudulent transactions in 2020.” Perhaps this is just a coincidence, or it is a good way to make Apple look high and mighty.

The Apple blog post opens with the claim that the company “helps keep the App Store a safe and trusted place for users to discover apps by detecting and taking action against fraudulent developers and users.” This action purportedly takes quite a bit of legwork behind the scenes, but they managed to protect customers from more than $1.5 billion in potentially fraudulent transactions. Furthermore, Apple reports having kept “nearly a million risky and vulnerable new apps out of their hands.” 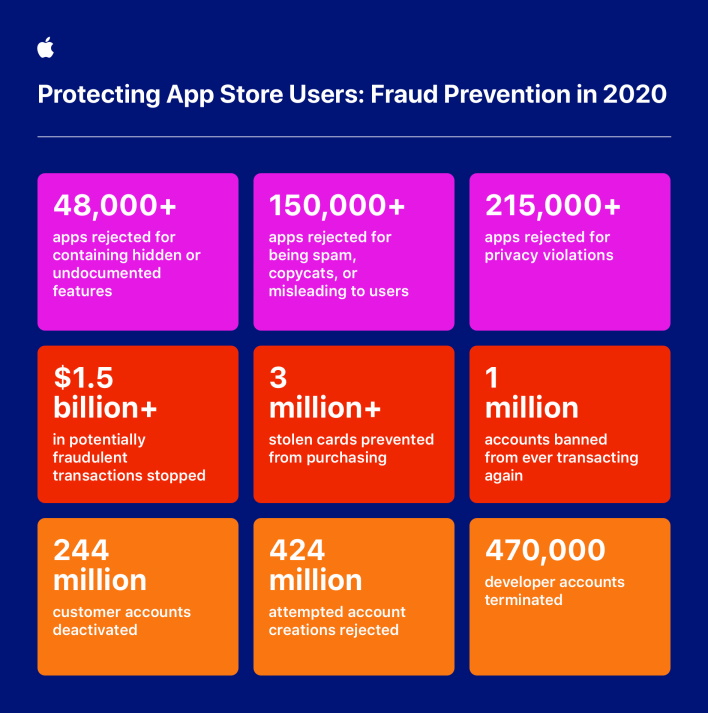 This level of protection is achieved by several layers, including the “App Review team,” which is described as an “essential line of defense.” They review every app and update while assisting app developers in getting their software onto the App Store. Interestingly, they specifically mention that the App Review team sometimes catches bait and switch apps, which change how the app works after review to evade guidelines.

The note about bait and switch apps was interesting because that is sort of what Epic Games did when this whole snafu kicked off. Furthermore, Apple has not posted anything like this in the past, so it is a bit odd to come out of the blue with this announcement. Perhaps Apple is trying to take the high and mighty road or simply boast about their App Store, but it is fishy timing either way.

If we do see this blog post make its way to the courtroom in the form of a discussion, we will then truly know what Apple’s motives are. Until then, we can only conclude that this post is for the good press and customer relations. However, if you have a different take, let us know what you think in the comments below.