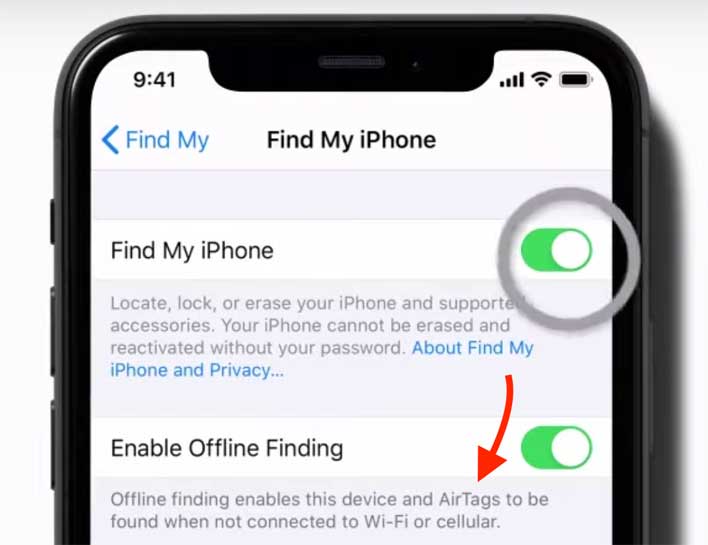 One of the popular features of the Apple iPhone and other Apple products is the ability to use an online service called Find My iPhone if you lose the device, or if it gets stolen. IPad users can also use the service to find their tablet if it's misplaced. There are devices out there, like Tile, that allow users to find items that don't have online connectivity or find devices like smartphones and tablets if they are turned off and not connected to a network.

Rumors have long suggested that Apple has a tracking device called AirTags. A reference to the AirTags tracking device has turned up in an Apple Support channel video on YouTube. The video referencing the AirTags was only online for a short time, but the screenshot above was captured before the video was pulled by Apple. The video was called "How to erase your iPhone." At the top of the screen was the standard "Find My iPhone" window with the toggle to turn that feature on and off.

The mention of the AirTags was below underneath "Enable Offline Finding" in a little blurb that reads, "Offline finding enables this device and AirTags to be found when not connected to Wi-Fi or cellular." AirTags are widely expected to compete directly with Tile to help users track things such as keys, wallets, and backpacks.

The first hints that Apple was working on AirTags surfaced in iOS 13 code last year. The tracking devices will be integrated with the new Find My app that will get an "Items" tab. Users will be notified by the device if they're separated from an item fitted with a tag and will be able to set the AirTags so that it starts making noise to help them locate the lost item.

In other Apple news this week, Apple leaked the iPhone SE name on its online store with a replacement for the popular original iPhone SE expected to launch soon.