Like cars and motorcycles, certain smartphone models tend to hold their value better than others, potentially getting you a bigger return if you flip it when upgrading to a newer handset. But is there truly a sizable difference between two of the biggest players, Apple and Samsung? There very well might be, according to a new report.
The folks at SellCell, an online smartphone and tablet trade-in platform and price comparison site, analyzed depreciation values of Apple's iPhone 13 range and Samsung's Galaxy S22 lineup. They looked at each model within both smartphone ranges and considered the resale value of those in "like new" and "good" condition. They also looked at Google's Pixel lineup. 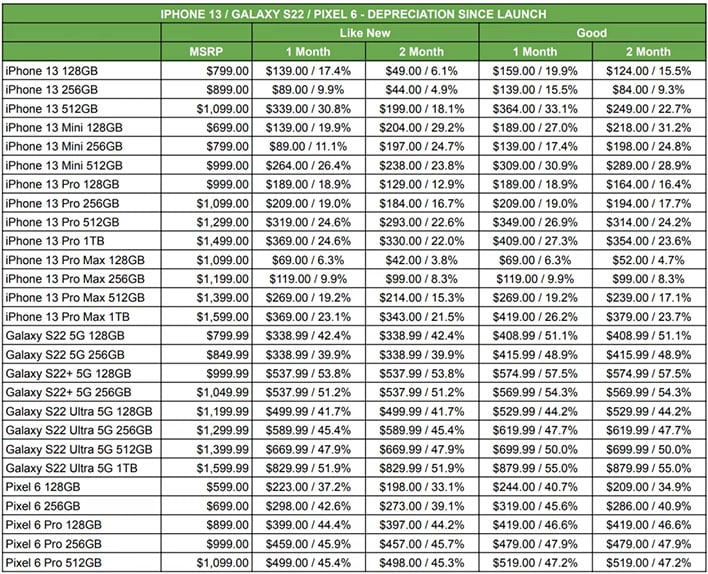 The iPhone 13 family, meanwhile, held onto its value much better than the Pixel 6 and especially the Galaxy S22. Apple iPhone 13 models in Good condition depreciated just 16.4 percent and those in Like New conditions dropped in value by 19.1 percent.
Out of the bunch, the site found Samsung's Galaxy S22+ 5G with 128GB of onboard storage took the biggest hit in value, depreciating by 57.5 percent (Good) and 53.8 percent (Like New). Meanwhile, iPhone 13 with 128GB lost 15.5 percent (Good) and 6.1 percent (Like New) after two months. Apple's best performer, the iPhone 13 Pro Max with 128GB of storage, depreciated just 4.7 percent (Good) and 3.8 percent (Like New).
We do have some concerns about the data and analysis. In the blog post announcing the results, SellCell sometimes comes off as smitten with Apple and more heavy-handed towards Android.
"Unlike those who shrewdly buy an iPhone—with all the value retention that brings alongside a fantastic product—those who invest in Android alternatives like a Samsung or Google handset can find themselves significantly short-changed," the site says.
Comments like that, while potentially divisive, don't necessarily mean the data is no good. For what it's worth, the site claims to be the No. 1 price comparison portal for selling phones, and says it constantly monitors the value of handsets across over 40 independent buyers. That kind of verbiage does raise some eyebrows, though.

That said, this is essentially a single snapshot, and it doesn't appear to take into consideration sales and promotions. Samsung is especially good about offering various discounts, preorder bonuses, and bundles from the get-go.

Nevertheless, the resale value comparison data is at least interesting.