I've said it before and I'll say it again—mini LED is the real deal in display technology. It's also finally starting to emerge in consumer displays, from a handful of TV models (like Samsung's Neo QLED lineup) to a spattering of gaming monitors. Falling into the latter category, AOC today announced a new Agon Pro model, the AG274QZM.
As you might have surmised from the model designation (or the headline), this is a 27-inch monitor. It's packing a whole bunch of mini LEDs to light up the display, resulting in a 750 nits brightness rating, with the ability to peak at an eye scorching 1,200 nits. On paper at least, that's plenty bright to make HDR content pop. Related, it boasts DisplayHDR 1000 certification.
This is also a fast and presumably responsive monitor with a 240Hz refresh rate, 1ms response time (gray to gray), and adaptive sync (with G-Sync Compatible certification). Wide viewing angles (178 degrees) are part of the package too, as is typical of an IPS panel. This particular one also features a 2560x1440 resolution. 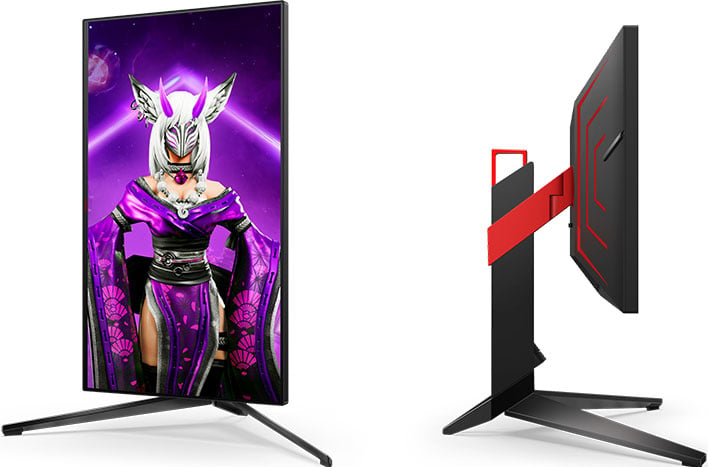 I can't speak to the image quality because I haven't seen this display in action. That said, the spec sheet is solid. Those mini LEDs are divvied up into 576 zones, which means the monitor has the capability of brightening and darkening specific parts of the panel for an overall better image. The other upshot of full array local dimming (FALD) with hundreds of zones is the potential for less light bleed, otherwise known as blooming or the halo effect.
"By turning on the backlight on only a small portion of the panel, the monitor can reach up to 1200 nits brightness to display bright visual features such as sunlight, fire etc., while displaying deep, dark shadows at the same time. This high dynamic range increases the perceived contrast ratio immensely and provides a rich, vivid and immersive gaming experience," AOC explains.

The monitor comes with a three-sided hood to block out ambient light and reflections. That's not something the typical gamer is likely to care about, but can be useful for content creation chores. It also features a built-in KFM switch so that users can easily switch between two sources, like a gaming PC and a work or streaming system, while using the same keyboard and mouse.

As for connectivity, the 27-inch monitor serves up two HDMI 2.1 ports, a DisplayPort 1.4 input, a 3.5mm microphone and headset jacks, and four downstream USB 3.1 Gen 1 Type-A ports.
The caveat to all this display goodness is the pricing. AOC says the Agon Pro AG274QZM will be available in June for £999.99, which converts to around $1,245 in US pricing. Mini LED displays carry a premium over traditional LED models, though generally not quite as steep as OLED. I've reached out to AOC about whether there are plans to launch this model in the US, and if so, when and for how much. I'll update this article when/if I hear back.