One of the best-selling Nintendo Switch games in a long time is Animal Crossing: New Horizons. The Stalk Market that was available in previous titles returns in New Horizons, which can allow the player to bank big in-game money, if they can buy low and sell high. One of the things that players of New Horizons look forward to each week is a visit from Daisy Mae that allows them to purchase turnips that they can resell later in the week for profit.

Each week Daisy turns up on Sunday between 6 AM and 12 PM and will sell bundles of 10 turnips. Gamers who have a fully expanded inventory can purchase up to 4000 turnips. One caveat is that the turnips can't be placed in storage. Players will need a physical location to put them, such a room inside their home on the island. Once gamers purchased the turnips, they can be sold at Nook's Cranny, and the goal is to buy the turnips at a low price and sell them at a high price. 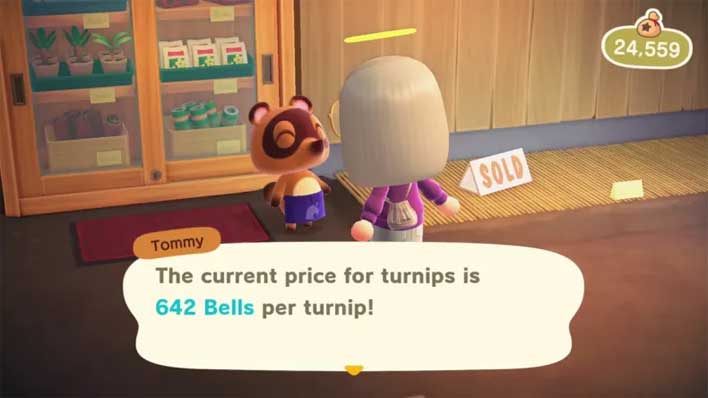 One of the more exciting aspects of the Stalk Market is that players who want to dedicate the time to it can make millions of in-game currency. One of the challenges, just like the real stock market, is that pricing fluctuates significantly both on the purchase end that Daisy Mae sells the turnips for, and the price that the turnips can be sold for at Nook's varies widely. Pricing at Nook's is set at 8 AM when the store opens in the morning, and the afternoon price is revealed at 12 PM.

Players have a week to sell the turnips before they spoil, as they have a specific shelf life, and players can't time travel with them or they will spoil instantly. Turnips will spoil at 6AM on the next Sunday, a week after you've purchased them. Reportedly, those wanting to strike it rich should only buy turnips if Daisy is selling them for 100 Bells or less. The selling price is typically between 50 and 150 Bells each. Players can also take a look at a friend's island and take advantage of the turnip prices on that island as well, for hopefully an attractive strike price.

Players can then sell their turnips on any friend's island by visiting the island and selling at Nook's Cranny on that island. Players can peruse the Animal Crossing Turnip Exchange on Reddit, where other gamers leave their Dodo codes when turnip prices are high on their island, in exchange for a tip in the form of Bells left behind by the player. This tactic is apparently how to make the big money.

Last we spoke of Animal Crossing: New Horizons was earlier this month when Amazon was a bit late getting some of the preorder games shipped to customers.