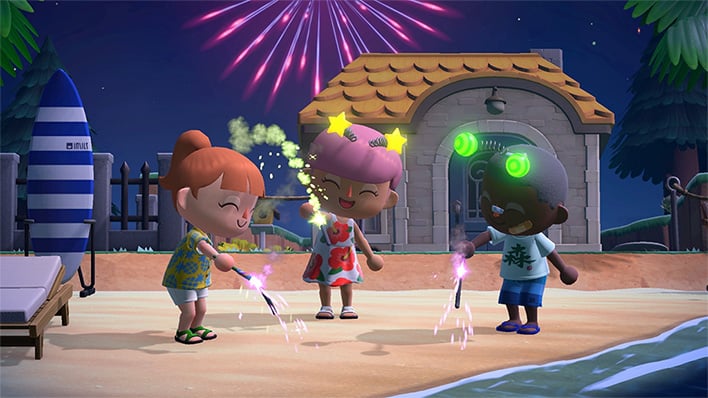 We are all doing the best we can to stay sane during this time of self-isolation and social distancing, and if you are looking for a fun distraction, Animal Crossing: New Horizons is a great escape from the real world. It is also getting another update. The upcoming Summer Update - Wave 2 will bring some features and goodies to the table, including cloud saves.
Being able to save your progress to the cloud is a potential godsend, should you lose your Switch console, or if it gets damaged. By saving to the cloud, you would at least be able to recover your island paradise, if something bad were to happen to your Switch.
"The island backup feature is separate from the Save Data Cloud functionality offered for select Nintendo Switch games through Nintendo Switch Online. A function specific to Animal Crossing: New Horizons to move users and save data to another system is planned for later this year. Details will be announced in the future," Nintendo says.

There will also be a new fireworks show with the upcoming update. These will take place every Sunday in August at 7:00 pm. As part of it, you will be able to redeem Bells for raffle tickets in the plaza to get different items you can use.
"Put your personal spin on the fireworks display by using your own custom design pattern to see it shot in the air as a firework in the sky!," Nintendo says.
In addition, Nintendo is adding the ability to take a nap in any bed that is placed in your home, and have strange dreams. While dreaming, users will be greeted by Luna, who will offer visits to other islands as a dream. Likewise, you will be able to share your island as a dream with others. In this state, nothing you do is permanent or saved, because, well, it's a dream.
The Summer Update - Wave 2 will go live on this Thursday, July 30.