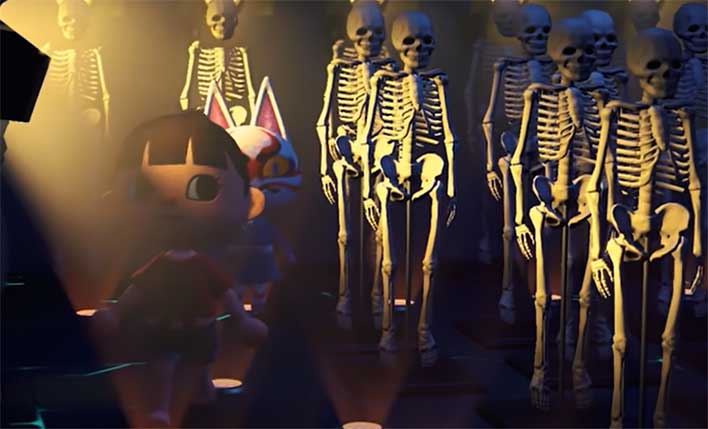 A person going by the very fitting name Evil Imp has used the incredibly popular game Animal Crossing: New Horizons to create a spooktacular horror movie trailer. The game was built by the developers to be a cutesy life simulator that allows fans to do all kinds of things, including make friends and build up their own virtual homes. Bu that hasn't stopped some gamers from turning it into a horror video game.

Evil Imp ratcheted up the scary vibes coming from the game by creating a roughly two-minute horror movie trailer using in-game footage. It appears to have taken significant time and effort to create complete with dramatic lighting changes, skeletons, ghosts, ax murderers, and other creepy settings. The trailer follows a young woman who moves to her dream island to begin a new life after some sort of mysterious disease kills her family.

While her life on the island starts as a paradise, it quickly spirals into what Imp calls an "endless nightmare." If the creepy horror movie trailer isn't enough to suit you, Evil Imp also managed his coronavirus downtime well and created a behind-the-scenes video, including footage of the in-game actors doing press conferences.

Imp doesn't give any real details on how he created the movie trailer, but it appears that he used Harv's photography island. Harv's island is a place that allows players to import Amiibo friends and has a photography studio enabling players to set up scenes to photograph and record. Some find Harv's home creepy because there's nothing inside except for a couch, a camera, a spotlight, and a director's chair.

Those who like creepy can watch the trailer and the behind the scenes video above. Gamers who aren't into this dark turn still have have more cheerful May Day events to enjoy. A few days ago, the special May Day events kicked off, including the May Day maze. Fans that missed the maze event still have the International Museum Day event and others to look forward to.