If you're playing Animal Crossing: New Horizons on the Nintendo Switch and sharing the system (and a single island) among family members, we're sure that this story will be a familiar one. There's a rivalry between siblings or across generations as parents and kids get out of bed early each morning and start shaking trees, hoarding all of the fruit for themselves. Or maybe there's a disagreement about how to decorate the island. Maybe, just maybe, there's competition for playing time for other games where the rest of the family just isn't into the island life. Rejoice, Animal Crossing fans, for Nintendo has heard your plea.

As part of the Winter Update, Nintendo has rolled out the Animal Crossing: New Horizons data transfer tool. If the constant competition has caused you to pick up a new Nintendo Switch and another copy of the game, now you can move your islanders—or even a whole island—to another console. To do transfers, you'll need two Switch consoles and two copies of the game. On the Nintendo eShop, download the Animal Crossing Transfer Tool, which is required for most of the features Nintendo has released. 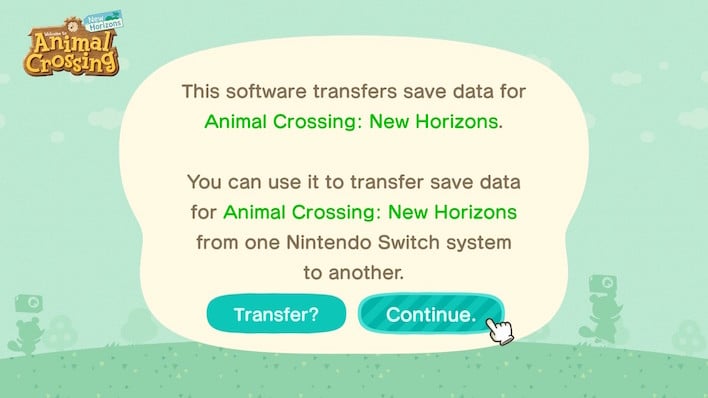 To get started, launch the Animal Crossing Transfer Tool on both the source and target Nintendo Switch consoles. A handy step-by-step guide will walk through the process of moving save data from one Nintendo Switch to another. The transfer tool can only move an entire island complete with all of its residents and items. A simple step-by-step wizard guides the whole process, and the result is that the data is moved off of one Switch and onto another. The same data cannot exist on both consoles, though.

But what if you don't have access to the Switch with the island any longer? Backups are always a good idea, even for game save data, and finally Nintendo has added cloud backup and restore. This feature is only available for those with an active Nintendo Switch Online subscription. The user account that wants to transfer the island must also have a resident on the island. That means you can't back up a save if only other people are playing it on the Switch. If the Switch is already broken, lost, or stolen, it's too late. Uploads can't be enabled remotely. 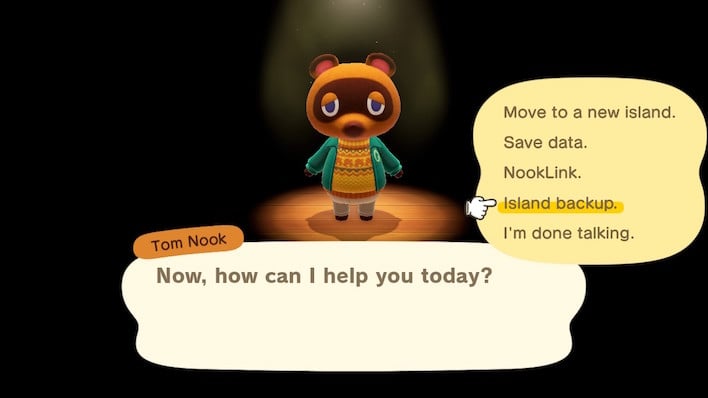 To enable cloud saves, access the Settings menu as outlined above. Tom Nook will walk through the process and the console will upload data automatically whenever the save data has changed. There are a few limitations to this process. For one, you can't just restore island data to another Switch on your own. The only way players can do the restore process themselves is if the system has been served by an authorized Nintendo Service Center.

That's frustrating for a gamer if the console dies and they just buy a new one to start playing again. Instead, those players who just bought new consoles have to contact Nintendo to get some assistance. This isn't the first time Nintendo has been behind the times when it comes to online services. Restoring purchases from both the Wii eShop and 3DS eShop also require contacting Nintendo. It'd be nice if Nintendo was a little more forgiving—hardware does break from time to time, after all.


However, if the system was serviced by Nintendo the process is straightforward. Now log into the new Nintendo Switch with the same Switch Online member and launch Animal Crossing: New Horizons. Hold the minus button as the black screen with the Nintendo logo appears, and the game will prompt you to restore a save from the cloud. Not only does the Switch Online subscription need to be active to upload, an expired one can't download the data. If the subscription has expired in the interim, you'll need to re-up before retrieving the island.

At the very least, having a backup of game save data is a relief as players approach eight months of island living. Even if it takes a little help from Nintendo, getting access to a backup lets players pick up where they left off. We're more happy about the ability to just move residents to a new console, though. That should relieve a little household conflict. You can check out Nintendo's how-to guide, here for more details.