Running servers for a popular game can be a lot of hard work. Unfortunately, sometimes there are jerks out there who want to ruin the fun for others, though. Luckily, some developers take it in stride. Like the developers of Among Us, the popular social deduction game, who suffered a distributed denial of service (DDoS) attack on Friday.

On March 26th, many players were disappointed to learn that they could not connect to the servers for the game. Later in the day, the official Twitter account made a post regarding the issue. The post stated that the servers are still down, but they are working to "...fix the DDoS sabotage." It included a pretty entertaining image with one of their characters seemingly apathetically just saying "Dang" in response to the servers being down.

they may come on/off but will update u when we think they're stable, sorry!!! pic.twitter.com/vMmb74ttbJ

The community response was varied but mostly positive overall. Many people who do play online games realize that in today's connected world, things like this do happen. Though Inner Sloth, the developers of the game itself, seems to have a sense of humor in the whole thing. One tweet from the Among Us twitter just says simply, with typos "cant believe im working on a saturday rn i was suppose to get a croissant." And to be honest, we don't blame them for the strife—who wants to be blocked access to French pastries!? We sure don't.

Later on one of the people responding posted that the developers of the game are "...the only professional company to get hacked and then go 'lol we've been sabotaged.'". To which Among Us developers responded with "reject professionalism embrace giving up." 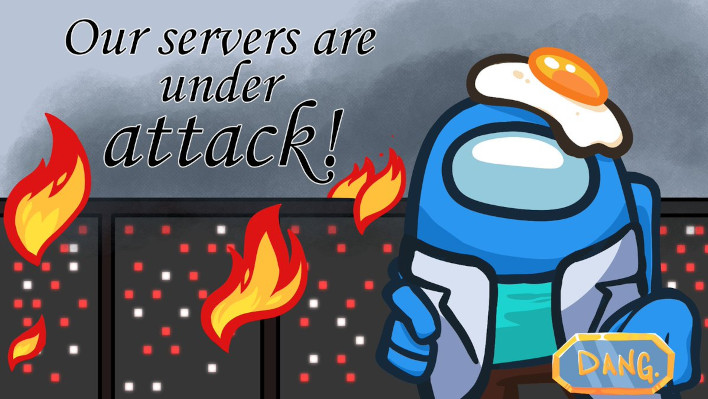 Of course, there are also plenty of satirical responses like, "have you tried turning the servers off and back on again?". Other responses even have ITSec professionals asking if Inner Sloth is hiring, which, we get it. Today's job climate is hard and working for a games company sounds fun, especially one that reacts to a severe attack on their services in the way it has done.

Other users buying some of the in-game currency experienced failed transactions. The team of course reimbursed anyone who didn't receive their goods, or made sure the transactions got processed. The problem did eventually get resolved with mitigation efforts put in place by Inner Sloth and its vendors. It did make for a fun few hours of Twitter conversation while the servers were down, though.