AMD Discusses Zen 3 Refresh, Zen 4 Technologies And How It Will Win The CPU Wars

AMD is quickly approaching five years of its Zen architecture being out on the market, with the original set of Ryzen processors having launched to retail in February 2017. It's been one heck of a five-year run for sure. In celebration of Zen's five-year anniversary, AMD's Robert Hallock, director of technical marketing, and John Taylor, chief marketing officer, sat down to reflect on the journey to this point and the roadmap ahead. The general takeaway? AMD is supremely confident Zen can compete for years to come.
This is notable, because AMD will soon be competing with a reinvigorated Intel, which earlier this year anointed Pat Gelsinger, the chief architect of yesteryear's Nehalem architecture, as CEO tasking him with righting the ship. And one of his first orders of business is getting Alder Lake out the door, which will attempt to shake things up with a hybrid design.
There has been speculation that AMD could also deliver a hybrid design down the line, perhaps with Zen 5, based in part on an AMD patent that appears to parallel Arm's big.LITTLE approach (Arm's brand name for its heterogeneous implementation). Only AMD knows for sure, but in the shorter term at least, the company feels it can "win" without going down that road.

"Mixed cores is one approach, the Android ecosystem took that a long time ago. But the way we plan to do it is going back to our roots, this Zen philosophy," Hallock explains. "We built a core that is physically much more smaller than what other companies were building in x86 land. When you pack that together with process leadership, packaging leadership like chiplets or 3D V-cache, when you pack that in with new firmware work we're doing, we can drive to much, much lower power profiles than we're even at today. We are the power efficiency leader today. We can keep doing that."
Hallock is clearly referencing Intel and its pending Alder Lake launch (though Lakefield is also a hybrid design), as AMD is not competing with any other company in "x86 land," as he puts it. And the message is fairly clear—the foundation of Zen with technological pillars like stacked 3D V-cache can get the job done, both today and into the future.
He goes on to explain that AMD is looking at the dynamic range of what Zen cores can do, spanning low power to high performance workloads, and feels strongly that this is a "recipe for success" regardless of what the competition is doing. More than that, Zen is AMD's ringer.

"Zen as a philosophy guides then, guides us now, and it's frankly how we stay ahead, it's how we win," Hallock says.
Hallock also makes clear that Zen is not sacrificing one area for another. He talks about how the underlying architecture, as it continues to be tweaked, refined, and essentially upgraded, will continue to deliver everything consumers care about—better IPC (instructions per clock), faster gaming performance, lower power, and related to all that, better performance per watt.
"We don't have to necessarily have to explore chip configurations that may be harder to address in software," Hallock says, referring to hybrid designs. 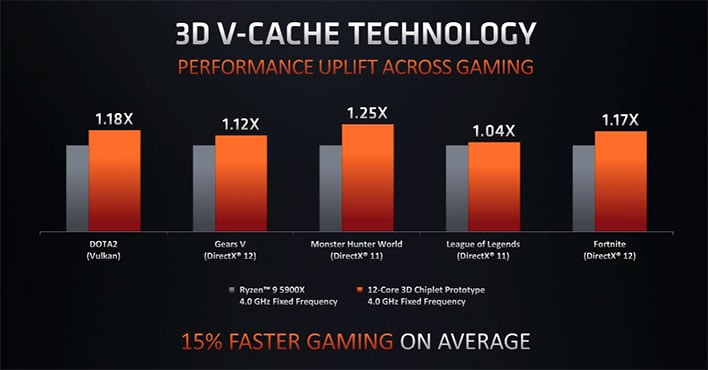 So what's next, then? In the near-term, we're looking at a Zen 3 refresh with the aforementioned infusion of stacked 3D V-cache. Hallock doubled down on 3D V-cache delivering, on average, a 15 percent performance jump in gaming, which is close to what is typically seen when going from one generation to the next. Except this will be achieved on the existing Zen 3 architecture. The new CPUs will be out sometime in early 2022, he says.
Then later next year, Zen 4 will hit the ground running. That will introduce a new socket, finally leaving behind AM4, though Hallock says in no uncertain terms that existing coolers designed for Zen 4 motherboards will work on the next-gen AM5 platform.
Hallock squashed a rumor, too, saying Zen 4 will absolutely support PCI Express 5.0, rather than stick with PCIe 4.0 for another round. Zen 4 will embrace the latest technologies, including DDR5. Beyond those nuggets, he didn't go into fine grain detail, but we'll find out soon enough.
It's definitely worth checking out the 14m32sec video embedded above. This is perhaps as outwardly confident we have seen AMD in quite some time. Not that AMD has been anything less than confident under the leadership of Dr. Lisa Su, and rightfully so. But in this instance, AMD is basically saying to the competition, 'Game on, [expletive]!'. Indeed, let the games begin.