AMD introduced Precision Boost Overdrive, or PBO, a couple of years back to make extracting additional performance from its Ryzen processors, in systems with additional power and thermal headroom, as simple as a few clicks in Ryzen Master. And today, the company just updated the feature with a couple of new wrinkles to boost performance of Ryzen 5000 series processors even further. 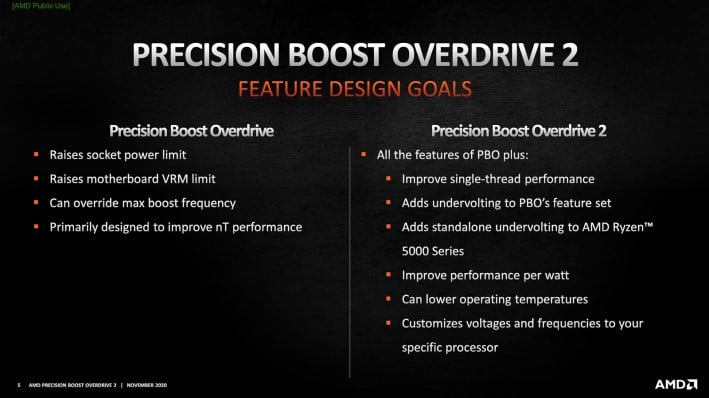 Unlike a manual overclock which can lock cores at a particular frequency, with Precision Boost Overdrive SenseMI is left in control of the processor, so frequencies and voltages can still dynamically scale up and down depending on the workload at the time. PBO monitors real-time environmental info from the processor in addition to data embedded in the BIOS by motherboard manufacturers that outlines the maximum power limits of that particular board. Enable PBO in Ryzen Master, crank up the power targets, and bingo -- you've increased system performance. 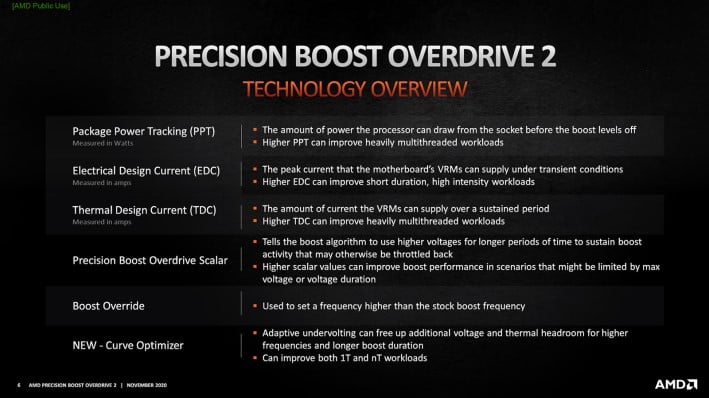 The features of Precision Boost Overdrive, what they do, and how they work are outlined in the slide above. Many of you are probably familiar with the first few items listed, but the Curve Optimizer listed at the bottom is new. The Curve Optimizer works in conjunction with some new adaptive under-volting capabilities to optimize performance under both heavy and light workloads. 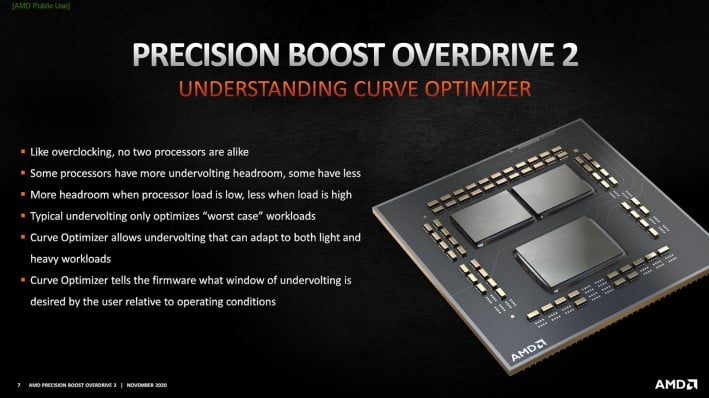 Previously, under-volting a processor meant picking a reduced voltage, testing, and ensuring stability for heavy workloads. However, this often left some unused margin unaccounted for, because there is more headroom available when the processor load is low, versus when every core is getting hammered. 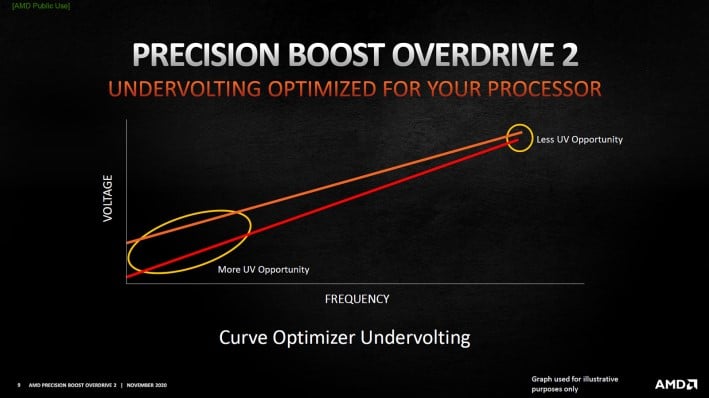 AMD Ryzen Master will be getting an update sometime early next year with the PBO 2-related options, but BIOS updates for some X570-based motherboards have already hit with necessary AGESA – more should be coming next month. For PBO 2 to work, you’ll need a Ryzen 5000 series processor, an AMD 500 or 400 series motherboard, and a motherboard BIOS with AGESA 1.1.8.0 (or newer) incorporated. 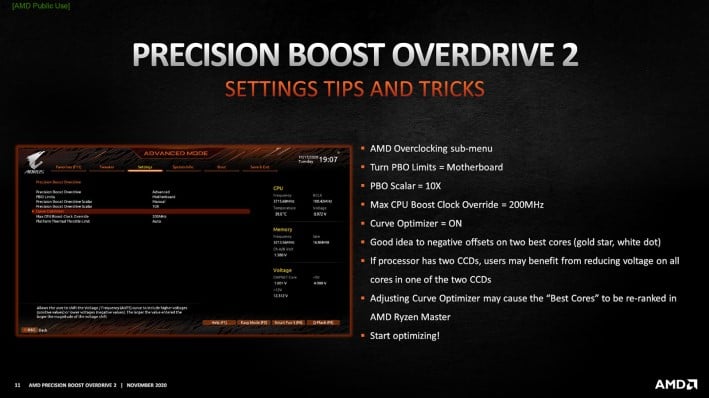 Once updated, the overclocking section on supported motherboards will stop using raw millivolts for under-volting and will instead use something called “counts”, which is essentially a small range of voltages. One “count” is worth approximated 3mV – 5mV and uses can apply a range of +/- 30 counts to fine tune their under-volt. The Curve Optimizer can be configured to tune all-cores or even individual cores and its algorithm is adaptive, which is to say it monitor data from the processor and intelligently reduce voltages to varying degrees, based on the workload at the time. 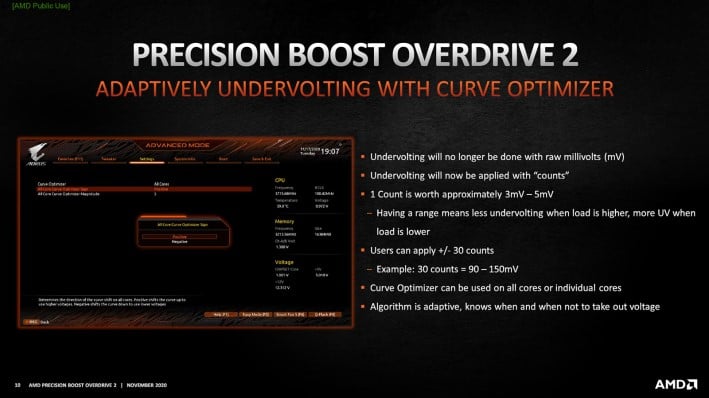 As such, a lower voltage can be used during idle or low-load states, and a higher voltage when the processor is under load. Of course, your mileage will vary depending on the headroom available with your particular processors, but that's the overall gist. 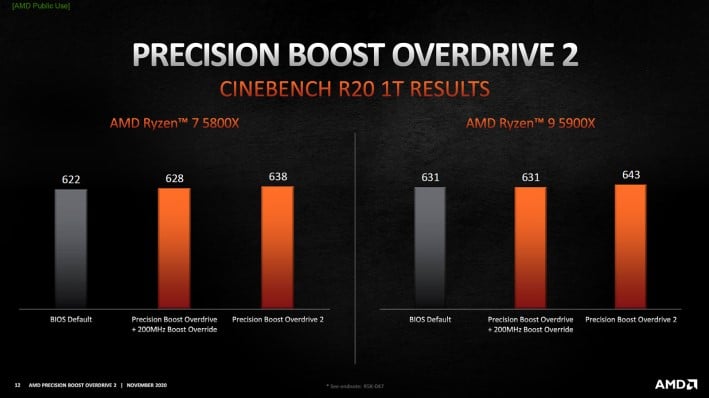 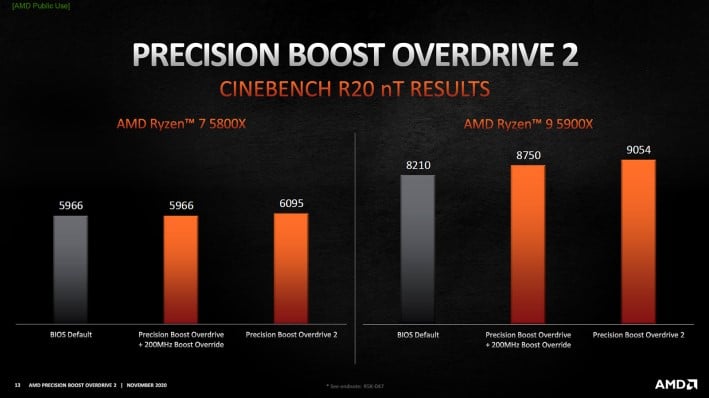 AMD’s data shows performance increases in both single and multi-threaded workloads with Cinebench, but PBO 2 – like PBO – should increase performance across the board. In addition, under-volting will bring temperatures down as well.

It is great to see AMD continuing to innovate and enhance the features and capabilities of its Ryzen processors and platform as a whole. PBO 2 appears to be an easy way to wring even more performance from a Ryzen 5000 series processor, without getting to deep into the weeds with a manual overclock. We look forward to testing it out as soon as all of the pieces are in place in the coming weeks.