AMD recently expanded its Ryzen arsenal with a handful of new and less expensive processor models, including a trio of Ryzen 5000 series CPUs. One of the new additions is the Ryzen 7 5700X. It features similar specifications as the Ryzen 7 5800X at a cheaper price point, but does the monetary savings come at a big performance cost? Not according to a recent benchmark entry.
The Ryzen 7 5700X is based on the same Zen 3 architecture as the Ryzen 7 5800X. It sports the same 8-core/16-thread design and 32MB of L3 cache, but has a lower TDP (65W versus 105W) and slower clocks—it runs at 3.4GHz (base) to 4.6GHz (max boost), compared to 3.8GHz to 4.7GHz. So you're giving up 400MHz on the base and just 100MHz on the boost. 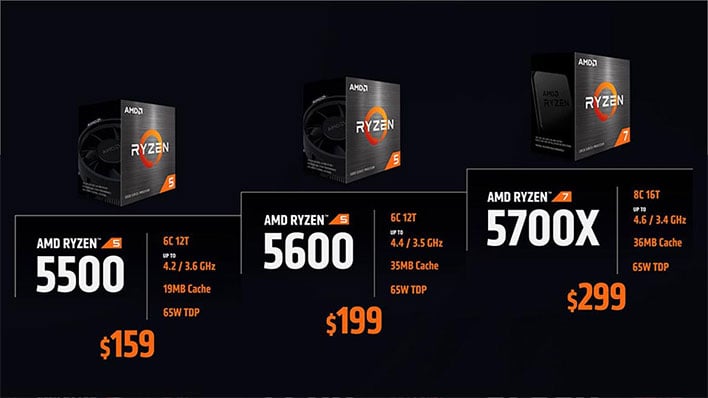 Part of AMD's unstated strategy with its spring refresh is to blitz the market with more affordable solutions to compete with Intel's Alder Lake onslaught. It also gives buyers interested in building an AMD PC more options to choose from at a variety of price points. In this case, the Ryzen 7 5700X carries a $299 MSRP. Technically, the Ryzen 7 5800X is a $449 part, though you can often find it for less. At Amazon, for example, it's currently listed for $348.
Comparing the Ryzen 7 5700X's MSRP to the Ryzen 7 5800X's street pricing, the latter carries a 16.4 percent pricing premium (and 50 percent if comparing MSRPs). So you spend the extra money on the faster SKU? Eventual reviews of the Ryzen 7 5700X will answer that question, but in the meantime, here's an interesting benchmark leak... 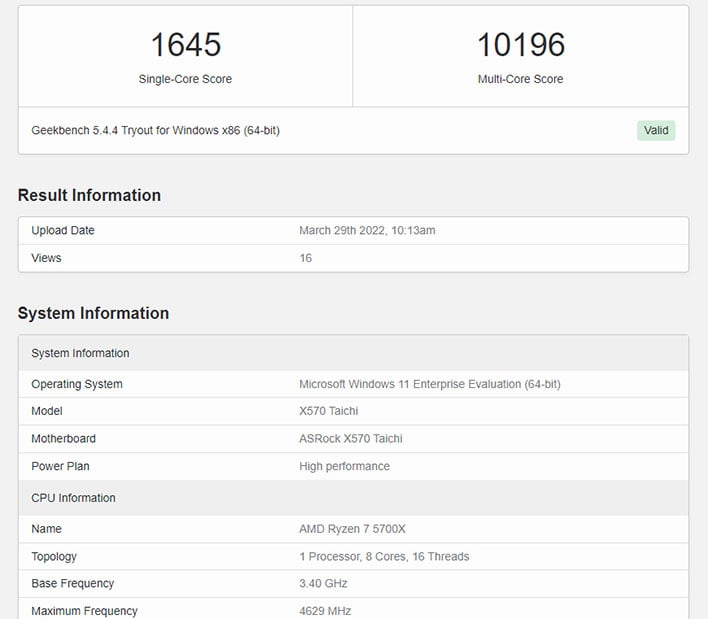 The Ryzen 7 5700X popped up on Geekbench where it scored 1,645 in the single-core test and 10,196 in the multi-core test. These were obtained in a test bed with an ASRock X570 Taichi motherboard and 32GB of DDR4-3200 memory, at what appear to be stock clocks.
Geekbench's database shows the average single-core and multi-core scores for the Ryzen 7 5800X come to 1,671 and 10,338, respectively. Both amount to a less than 2 percent uplift: 1.58 percent for single-core and 1.39 percent for multi-core.
Note that those scores differ from our own results. When we benchmarked the Ryzen 7 5800X, it posted a single-core score of 1,719 and a multi-core score of 10,831. Still, we're looking at gains of 4.5 percent and 6.2 percent.
The usual caveats apply, those being it's problematic to compare scores with leaked benchmark runs, the platforms are different, cooling is probably different, and drivers are probably different, to name a few. Additionally, this is just a single benchmark utility. You can decide for yourself how much stock you put into Geekbench. These results aren't real surprising, though, given that there's just 100MHz to 400MHz that separate these two chips.