Back in mid-April, AMD officially launched its Zen 3-based Ryzen 5000G Series of desktop processors. Unlike Zen 3 "Vermeer" desktop processors a la the Ryzen 9 5950X, these new "Cezanne" processors feature integrated graphics courtesy of a Radeon Vega GPU (with up to 8 GPU cores).

AMD announced the Ryzen 7 5700G as its flagship Cezanne processor, and now we're getting a small glimpse at the kind of performance it will offer when it ships in OEM systems. Famed hardware leaker @TUM_APISAK found entries for the Ryzen 7 5700G in UserBenchmark and CPU-Z databases.

For the UserBenchmark score, the Ryzen 7 5700G was installed in a Hewlett-Packard Pavilion Desktop (TP01-2xxx), scoring 98.5 percent for the processor benchmark and 18.5 percent for the graphics benchmark. The low graphics score should come as no surprise given that AMD is still clinging to its legacy Vega GPU architecture for its APUs. It won't be until at least Zen 4 architecture is launched that we'll see a significant upgrade with integrated RDNA 2 GPUs in Ryzen APUs. 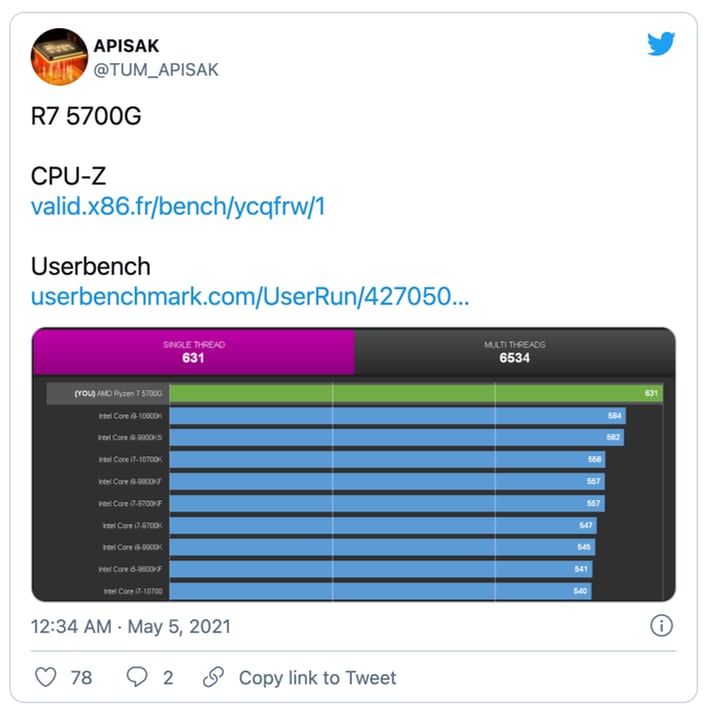 For the CPU-Z result, we're looking at single- and multi-core scores of 631 and 6534, respectively. That puts the processor ahead of the previous-generation Intel Core i9-10900K in the single-threaded benchmark.

OEMs, of course, have first dibs on the new Ryzen 5000G processors, but AMD says that DIY PC enthusiasts will be able to get their hands on the chips later this year.