You knew that sooner or later, someone would perform surgery on a Ryzen 5000 series CPU, peeling away the integrated heatspreader (IHS) to give us a look at the actual die. This is a process that is not for the faint of heart (or faint of wallet/purse, either). And now just days after Zen 3 made its retail launch, someone has already performed the surgery, and uploaded several high resolution photographs.
The CPU sitting in the naked spotlight is the Ryzen 5 5600X. It is (so far) the lowest end Zen 3 processor, and likewise the most affordable of the bunch. For anyone who is not already familiar with the chip's specifications, it is a 6-core/12-thread part with a 3.7GHz base clock and up to a 4.6GHz max boost clock. It also has 32MB of L3 cache, 3MB of L2 cache, and a 65W TDP.
We have not reviewed this one yet, but if the performance per core and watt scales down in line with the Ryzen 9 5950X and Ryzen 9 5900X (which we have reviewed), as we anticipate it does, then it's another winning CPU in AMD's newly launched Zen 3 lineup.
Back to the photos, Fritzchens Fritz posted a handful of them, including the one you see at the top of this article. He also takes infrared photos, and then posts links on his Twitter account (give the fellow a follow!).

As you can see in the image above, removing the IHS from a CPU does not always go without a hitch. In his attempt to lift off the IHS, it took the core complex die (CCD) with it, undoubtedly destroying the CPU in the process. But we still get some neat shots of the CPU. In addition, this paved the way for some nifty labeling of the die. 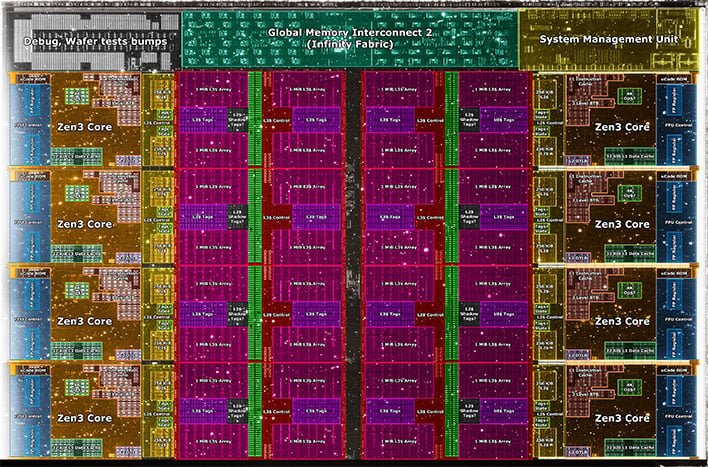 Twitter user Locuza took one of the die shots and filled it in, with the following observations and comparisons to Zen 2...
Zen 3 is a new architecture, and the CCD is comprised of one core complex (CCX) with up to eight cores instead of two CCXs as found in Zen 2. And with room for up to two CCDs, Zen 3 will go to 16 cores and 32 threads (like the Ryzen 9 5950X).
Fritz's photos also show that the CCD measures 11.270mm by 7.430mm, for a total area of 83.736mm2. For comparison, Zen 2 measures about 72mm2. The entire CPU, however, is the same size of course and uses the same AM4 socket, and even the same chipsets.
Hat tip for Fritz and Locuza for the excellent shots and diagramming.