Tech companies are not always keen about commenting on leaks and rumors, but they do make exceptions on occasion. This is one of those times. In no uncertain terms, AMD cast a wet blanket on a rumored Ryzen 5000 series refresh bringing increased performance to desktop CPUs based on the company's Zen 3 architecture. That said, there will be a new stepping.
DevOps engineer and prominent leaker Patrick Schur called attention to AMD's plans to supplant its current Zen 3 desktop lineup with B2 stepping silicon. Otherwise known as Vermeer, he pointed to a pair of new desktop SKUs—one presumed to be a Ryzen 9 5950XT and the other a Ryzen 5 5600XT. The former ranked as the more interesting of the two, because it was said to have a 3.4GHz base clock and 5GHz max boost clock. 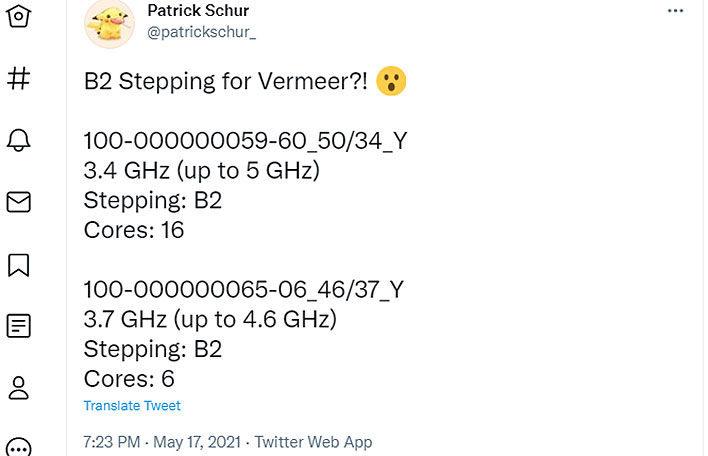 None of AMD's current generation processors have a stock 5GHz frequency, so if such a chip materialized, it would be the first time a Zen 3 part breached 5GHz at factory settings. That would be especially enticing on a 16-core/32-thread processor, though in reality, a 100MHz bump over the Ryzen 9 5950X wouldn't yield a huge performance boost.
It doesn't matter, though, because AMD tapped its inner Jedi and said these are not the XT models you are looking for.
"As part of our continued effort to expand our manufacturing and logistics capabilities, AMD will gradually rollover AMD Ryzen 5000 series desktop processors to B2 revision over the next six months. It does not bring functionality or performance improvements, and no BIOS update is required [for the B2 revision]," AMD said in a statement.
Based on AMD's comment on the B2 rumor, the upcoming revision will not bring with it higher clock speeds. This is perhaps why the supposedly leaked specifications for what was presumed to be a Ryzen 5 5600XT were identical to the existing Ryzen 5 5600X—same base and boost clock.
While a minor bummer, this could potentially mean a ramp in supply of AMD's newest silicon. AMD's mid-range CPUs have generally been easier to find in stock compared to the Ryzen 9 5950X and Ryzen 9 5900X, and maybe the B2 revision will result in greater availability. It's too early to tell, obviously, but we can hope, right?