At some point, AMD may have considered launching a Radeon RX 6900 XTX (note the extra "X") graphics card with an all-in-one (AIO) liquid cooling solution already attached. And perhaps it will still come to fruition at some point. As it stands, the card does not officially exist, but unofficially, photos of a supposed engineering sample have popped up on the web.
This is not uncharted territory for AMD. Remember the Radeon RX Vega 64 Liquid Cooled Edition? That one came with an AIO cooler attached as well, and a bit faster base and boost clocks for added performance over the air-cooled model. It also had a higher TDP at 345W versus 295W to facilitate the goosed clock speeds.
Will the Radeon RX 6900 XT see the same treatment? We don't know, but there are at least pictures of what AMD might be planning to launch, or had planned to launch at one point. One of them you can see above, which we've lightened up to make the tubing and 120mm radiator more visible. And here's another look at the card... 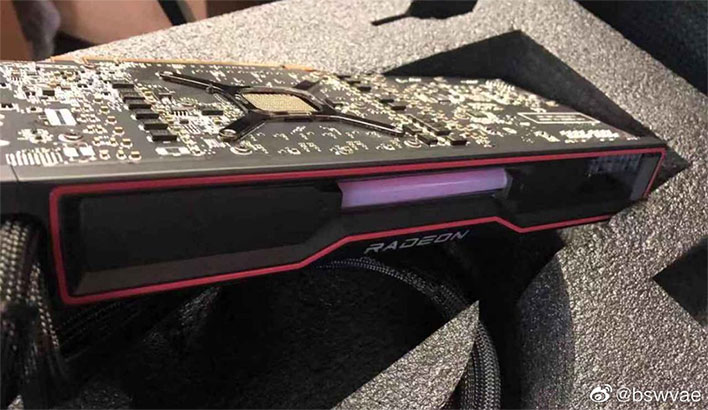 Both pictures are from a forum post on Weibo. We ran the post through Google Translate, and according to the translation, the user is a "computer DIY enthusiast, an AMD fan," and works in customer service at a computer store.
"I often get in touch with some CPU and graphics card out of the box and evaluation. Internal non-public sales products, such as the RX6900XTX water-cooled version," the user wrote.
The air-cooled Radeon RX 6900 XT is built around a Navi 21 XTX graphics chip with 80 compute units, 5,120 stream processors, 320 TMUs, 128 ROPs, and 80 RT cores. It has a 1,825MHz base clock, 2,015MHz game clock, and 2,250MHz boost clock, along with 16GB of GDDR6 memory (16Gbps) mated to a 256-bit memory bus, for 512GB of memory bandwidth. The TDP is rated at 300W.

What about the Radeon RX 6900 XTX with its AIO cooler? It likely features the same core specs, but with faster clocks and a higher TDP. Incidentally, AMD recently began providing its hardware partners with a Navi 21 XTXH graphics chip, which is basically a hyper-binned Navi 21 XTX for high-end Radeon RX 6900 XT variants intended for extreme overclockers like Sapphire's Toxic Radeon RX 6900 XT Extreme Edition.

If the Radeon RX 6900 XTX ever comes to fruition, it's possible it could feature the Navi 21 XTXH, but that would relegate to extremely niche circles (even more so than what a flagship GPU already occupies). Of course, we'll have to wait and see if this even becomes a shipping product.