We already know from our Radeon RX 6900 XT review that AMD's flagship graphics card is a fast performer in its own right. It does not quite take the performance crown from NVIDIA's GeForce RTX 3090, but it is still a beastly GPU. And hey, if you have a supply of liquid nitrogen that's freezing a hole in your pocket, you might be able to push one all the way to 3.3GHz, as an overclocking team from Greece has done.
Team OGS took apart AMD's flagship card, then slapped it into an ASUS ROG Crosshair VIII Dark Hero motherboard alongside a Ryzen 9 5950X processor and 16GB of G.Skill DDR4 memory running at 3,800MHz. That is one heck of a powerful foundation even at stock settings. Instead of running at stock, though, team OGS did what it does and doused both the CPU and GPU in liquid nitrogen. 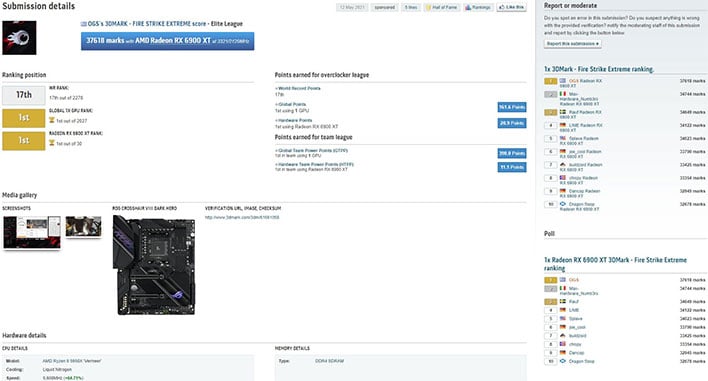 The record overclock listing is not currently viewable on HWBot because the site is down for maintenance, but a Twitter user did us a solid by providing the above screenshot, before it went offline. If you click to enlarge the image, you can make out the LN2 pots on both the processor and graphics card.
At stock settings, the 16-core/32-thread Ryzen 9 5950X sports a 3.4GHz base clock and 4.9GHz max boost clock, along with 64MB of L3 cache and a 105W TDP. For this overclocking feat, however, team OGS cranked the clock all the way to an impressive 5.6GHz. Hooray for exotic cooling (and for getting their hands on the elusive slice of silicon).
The GPU overclock and subsequent benchmark run are the real feats, though. A Radeon RX 6900 XT wields 5,120 stream processors and 16GB of GDDR6 tied to a 256-bit bus. At stock settings, it has a 1,825MHz base clock, 2.015MHz game clock, and 2.250MHz max boost clock.
For this benchmark run, the team used a PowerColor Red Devil Radeon RX 6900 XT Ultimate, which cranks the boost clock to 2,425MHz in OC mode. With the benefit of LN2 cooling and a specially binned Navi 21 XTXH GPU, the team was able to setting an overclocking record by pushing the card to 3.3GHz. The team then benched the card in 3DMark. 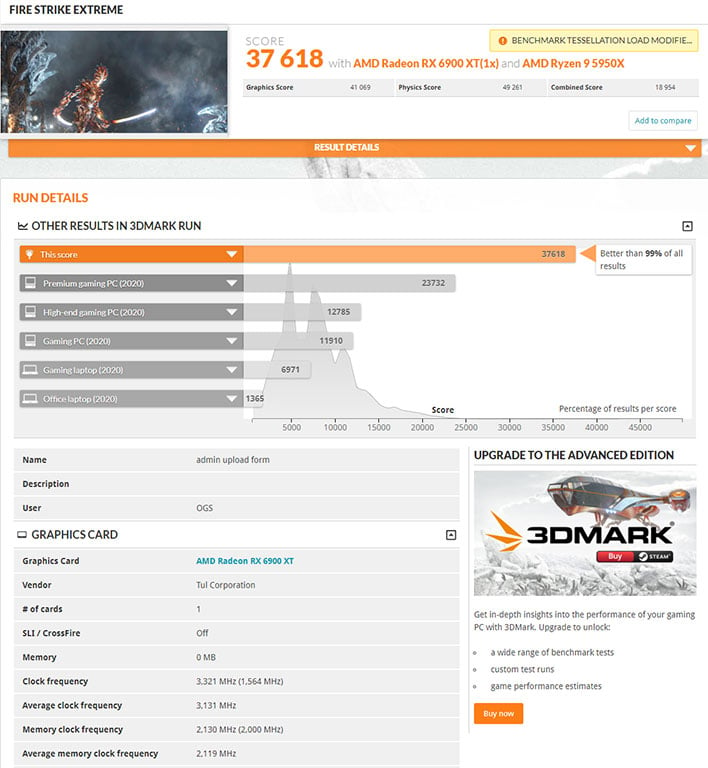 In the 3DMark Fire Strike Extreme test, the heavily overclocked GPU and GPU scored a whopping 37,618 overall, along with a 41,069 Graphics score, 49,260 Physics score, and 18,954 Combined score. Those are superb numbers. And looking at the overall score, the team now holds the top spot. The next best score is 34,744, which OGS managed to beat by more than 8 percent.
Obviously LN2 cooling is not feasible for mainstream use. However, it's still neat to see enthusiasts push the latest generation silicon to new heights, when removing heat as a barrier. This also shines a positive light on those specially binned Navi 21 XTXH GPUs that are only found in a few select models. Not that anyone can actually buy one (*shakes angry fist at the silicon shortage gods*), but hey, it's fun to see what others can do with the newest hardware.