AMD chose not to make a big ballyhoo over the latest addition to its RDNA 2 lineup, the Radeon RX 6400, and instead opted for a low key launch. All the same, it's out now and it's not a paper launch either—there are a few retail listings with cards in stock. So what are we looking at, in terms of pricing, specs, and performance?
The Radeon RX 6400 is an entry-level graphics card that slides a peg underneath the Radeon RX 6500 XT. It's designed around a Navi 24 XL GPU built on a 6-nanometer manufacturing process and is equipped with 12 compute units, 768 stream processors, 48 TMUs, 32 ROPs, and 4GB of GDDR6 memory (14Gbps)  linked to a 64-bit bus for up to 128GB/s of memory bandwidth. It also features 16MB of Infinity Cache.
It has a 2,039MHz game clock and 2,321MHz boost clock. This all results in 7.13 TFLOPs of FP16 (half-precision) and 3.57 TFLOPs of FP32 (single-precision) performance, along with a peak pixel and texture fill rates of up to 74.3 GP/s and 111.4 GT/s, respectively.
For comparison, the Radeon RX 6500 XT sports 16 compute units, 1,024 stream processors, faster memory (18Gbps), 11.53 TFLOPs of FP16 performance, and 5.77 TFLOPs of FP32 performance. 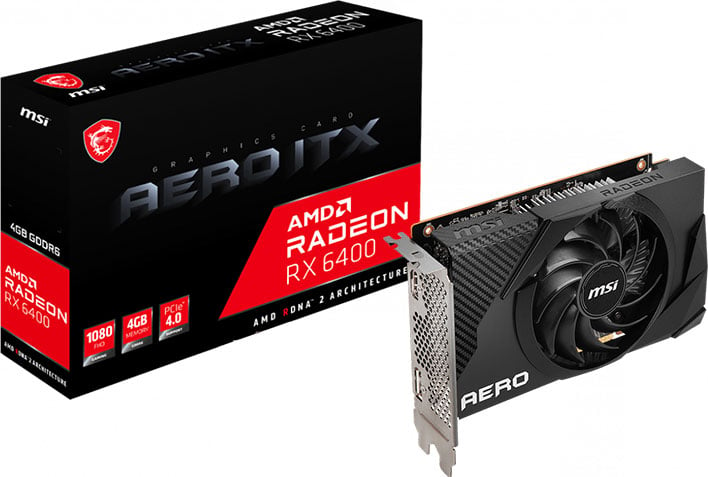 It doesn't look like AMD is offering its own reference model and instead is leaving it up to its hardware partners to release custom models. The low power card (53W) draws all of its juice from the PCIe slot (no power cable required) and can fit into tight confines—the cards we've seen so far are either single-slot and half-height, or compact and double-slot variants. The starting price has landed at $159.99.
Here are some listings that are live right now...
The Radeon RX 6400 is the only low profile option within the RDNA 2 family, making it a suitable candidate for certain small form factor builds, or systems that are otherwise tight on space.
As to the performance of the Radeon RX 6400, we haven not tested this card but slides obtained by Videocardz indicate it's capable of delivering 60 fps or higher at 1080p in games like Borderlands, Far Cry 6, Doom Eternal, F1 2021, Fortnite, and so forth. One of the slides also claims the card is faster than NVIDIA's GeForce GTX 1650.