A new UserBenchmark database entry has us all kinds of intrigued because it seemingly references an AMD Radeon RX 6000 series graphics card that has not yet been released yet. There are multiple possibilities at play, including an early prototype that was ultimately scrapped. However, if this is indicative of a product that will ultimately get released, then AMD may have something especially interesting in the works.
Let's start with the actual leak. An entry dated August 4, 2021 highlights a desktop system built around an MSI X470 Gaming Plus motherboard, a Ryzen 7 2700X processor, 32GB of memory, and both a 1TB Samsung 970 Pro NVMe SSD and 500GB WD Blue 3D SATA SSD.
Have a look... 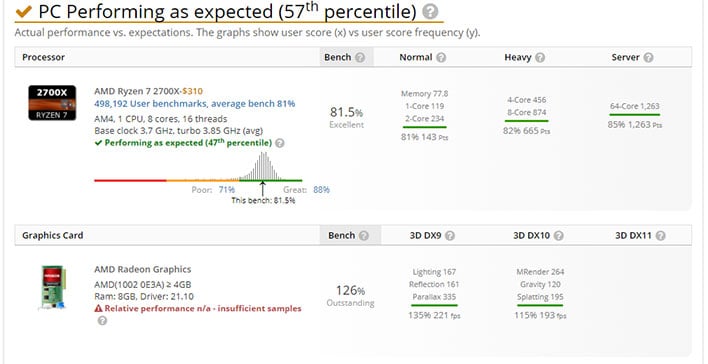 What is so intriguing, though, is not the last-gen makeup of the platform at large. It is the unnamed "AMD Radeon Graphics" part with 8GB of GDDR6 memory. The card's ID points to this being powered by a Navi 21 GPU, which so far has only manifested in the Radeon RX 6900 XT, Radeon RX 6800, and Radeon RX 6800, all of which have 16GB of GDDR6 memory.
Here's a handy cheat sheet:
And here's how the mobile RDNA 2 family lines up...
Prominent leaker Komachi spotted the benchmark leak and may have some inside knowledge, though if so, they are not sharing it. The fact that they felt compelled to tweet it out, however, hints that there is more to the story than UserBenchmark just misreading the specifications.
Being an otherwise last-gen platform, the most likely explanation is an earlier prototype—maybe AMD toyed around with the idea of launching a Radeon RX 6800 with half the amount of memory. Otherwise, there is not a whole lot that makes sense. We could still see a Radeon RX 6700 (non-XT) slip into the lineup with 8GB of memory, but building it around a Navi 21 GPU would be odd at best.
This could also be a mobile kit being tested on a desktop platform, but again, the combination of Navi 21 with 8GB of memory does not neatly fit within the existing lineup. Prototypes can be weird that way, though, so who knows.
We'll have to wait and see what, if anything, this turns out to be. In the meantime, consider us stumped.