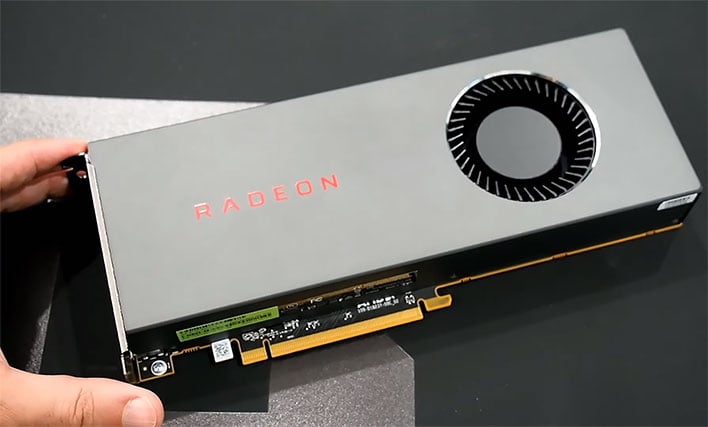 AMD formally launched its Navi GPU architecture with the release of its Radeon RX 5700 series of graphics cards, and slowly but surely, the company is fleshing things out with more SKUs. That includes the recently launched Radeon RX 5500 series. Coming soon, however, is a new Radeon RX 5600 series, including an XT model that is the subject of a new leak.
Before we get to the Radeon RX 5600 XT, let's quickly look at the core specs of AMD's existing Navi lineup, for context...
Quick refresher out of the way, let's return to the Radeon RX 5600 XT leak. We have been hearing about a Radeon RX 5600 series since at least July, with one of the earliest leaks suggesting the new cards will arrive with a Navi 14 GPU underneath the hood, with 1,536 stream processors (24 CUs). Those specs might now be wrong, though.
According to fresh information from Igor's Lab, sources from AMD's board partners in China say the Radeon RX 5600 XT will again tap Navi 10. This would serve a dual purpose—it would give the Radeon RX 5600 XT some added performance, and help keep costs in check for board partners, as they would remain pin-compatible with existing PCB designs. This would also result in the cards coming to market faster.
This would make things interesting, for sure. AMD's Navi 10 GPUs feature two shader engines, each with two asynchronous compute engines. Reportedly, AMD could disable one of the four asynchronous compute engines for the Radeon RX 5600 XT.
If left unlocked, however, Navi 10 sports 2,560 stream processors (40 CUs), 160 texture mapping units, and 64 render output units. It wouldn't make sense for AMD to leave it unlocked, though, because the Radeon RX 5700 XT already occupies that space..
What's most likely to happen is AMD will disable one of the four asynchronous compute engines, resulting in 1,920 stream processors (30 CUs), 120 texture mapping units, and 48 render output units. It's also rumored the card will arrive with 6GB of GDDR6 memory, though an 8GB SKU is possible as well. Either way, we'd be looking at a 192-bit memory bus.
While nothing is official, the rumored specs would slot in nicely with AMD's existing Navi lineup. We'll have to wait and see, though.