A recent Linux patch from AMD hints that the company might be gearing up to refresh its second generation Radeon DNA (RDNA 2) graphics card lineup, similar to how NVIDIA has a history of adding "Ti" and "Super" variants of its GPU product lines. Nothing is official at the moment, but if a refresh does occur, would expect to see a bump in performance and power efficiency.
Before we get to the Linux patch, let's go over AMD's current generation lineup. The Radeon RX 6000 series on the desktop consist of the following models...
There's obviously room to introduce lower end models, as well as possibly inject a regular (read; non-XT) Radeon RX 6700 into the mix, when and if AMD decides to go those routes. But in addition, AMD could also introduce refreshed RDNA 2 models based on TSMC's 6-nanometer manufacturing process. Whether that happens or not, we can't say for sure. But that is where the Linux patch comes into play. 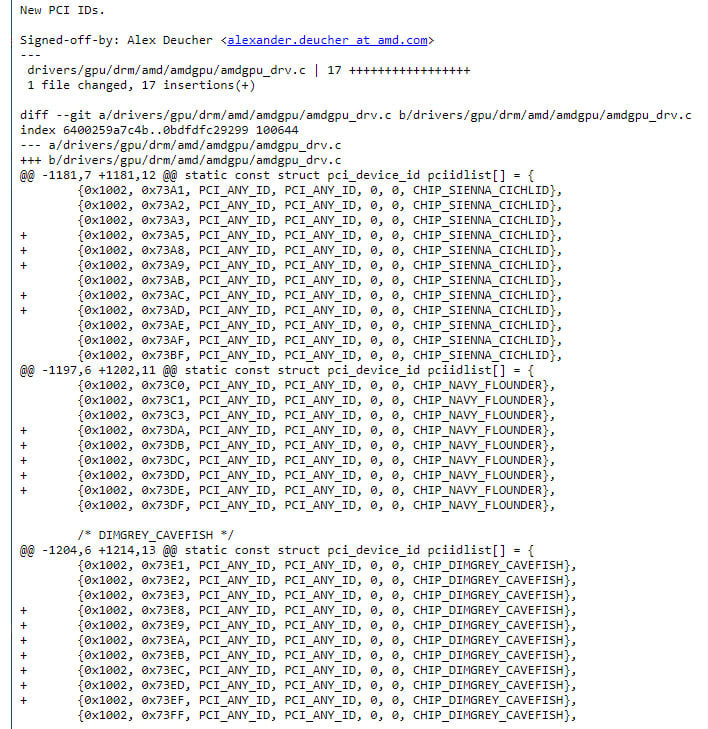 AMD's driver team added 17 new device IDs to the latest Linux kernel patch. These are spread across Sienna Cichlid (Navi 21), Navy Flounder (Navi 22), and Dimgrey Cavefish (Navi 23). You can see them above, but here's the breakdown...
There are multiple places these IDs could show up. For example, they can pertain to custom models by AMD's add-in board (AIB) partners that have not yet been released. And it is entirely possible (even plausible) that at least some of them will end up there. Same goes for possible new revisions of existing GPUs.
However, it is a bit unusual to see so many new device IDs emerge at this stage. Hence why there is speculation that some (probably not all) of these new IDs could apply to an RDNA 2 refresh.
It's worth noting that last week, a hardware leaker suggested AMD will use a mix of RDNA 3 and RDNA 2 GPUs in its Radeon RX 7000 family. As it applies to RDNA 3, it's said we are looking at Navi 31 for the Radeon RX 7900 XT, Navi 32 for the Radeon RX 7800 series, and Navi 33 for the Radeon RX 7700 series, all built on a 5nm node.
Meanwhile, the leaker said refreshed version of RDNA 2 based on 6nm will be thrown into the mix, including NAvi 24, Navi 23, and Navi 22 GPUs. Whether that actually happens or not remains to be seen, but the updated Linux patch suggests there could be truth to the rumor.