AMD is rolling out a new graphics product based on its second-generation Radeon DNA (RDNA 2) architecture, though it's not for home PCs and consumers. Instead, the Radeon Pro V620 is a multi-purpose GPU accelerator for cloud workloads. That includes doling out "immersive AAA game experiences" through cloud gaming.
If there's a silver lining to the GPU shortage as a whole, it's that companies are intensifying their efforts to bolster cloud gaming services, which remove much of the core hardware requirements from the user's end. Low-powered laptops and even smartphones can tap into some of these services for a high-end gaming experience.

"We’re seeing adoption of gaming in the cloud from customers around the world, taking advantage of the latest virtualization features delivering efficient and low latency content streaming to multiple simultaneous users. AMD Radeon Pro V620 is yet another proof point of AMD’s excellence in gaming—from the PC to the console and now to the cloud." 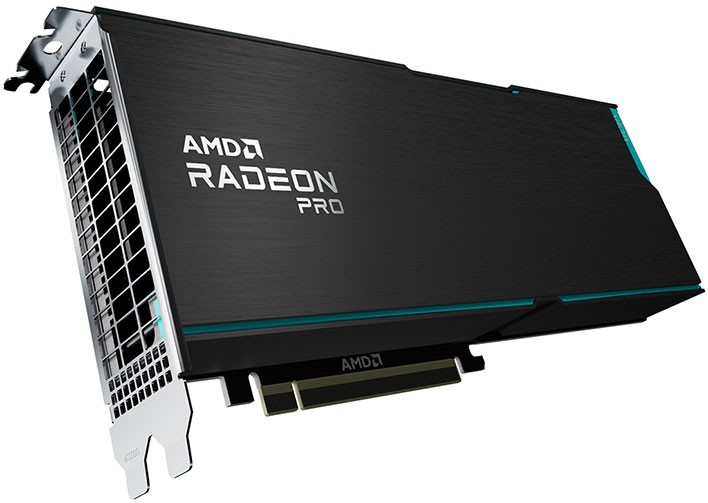 The Radeon Pro V620 features 72 compute units and 4,608 stream processors, same as the Radeon RX 6800 XT. However, they're two very different products. The Radeon Pro V620 also packs 32GB of GDDR6 memory (16Gbps) with Error Correcting Code (ECC), linked to a 256-bit memory bus for 512GB of memory bandwidth. That's twice as much memory as both the Radeon RX 6800 XT and Radeon RX 6900 XT, with a bus width that is also twice as wide.
Other features of the Radeon Pro V620 include a peak 2,250MHz GPU clock, 72 ray accelerators, and a peak 300W power rating. Put it all together and you have an accelerator capable of 40.55 TFLOPs of half-precision (FP16) and 20.28 TFLOPs of single-precision (FP32) performance.
Cloud gaming is one potentially use-case, and an intriguing one, with rival NVIDIA recently bolstering its GeForce NOW service with GeForce RTX 3080 hardware. But aside from that, AMD also points to DaaS, WaaS, and machine learning scenarios.